A movie about a haunted house may not be so ‘been there done that,’ considering the housing nightmare these days. And which renders the notion in Peter Cornwell’s The Haunting In Connecticut not quite so far fetched, what with the foreclosure crisis in full swing, that even the undead may object to vacating the premises when what they perceive as human home invaders turn up. Though whether it’s a question of real estate or simply the real life residents making the alleged claims about this spooky house in order to cash in, is up for grabs. But not necessarily a factor in assessing the effectiveness on the terror meter here.

It’s 1987, and Sara (a never disappointing Virgnia Madsen) has packed up and moved her brood of children and their cranky alcoholic dad (Martin Donovan) to rural Connecticut near a hospital where her teen son Matt (Kyle Gallner), stricken with advanced cancer, will be able to receive regular experimental treatments nearby. Short on funds in the face of their mounting medical expenses, they settle on a dilapidated old retro-McMansion. 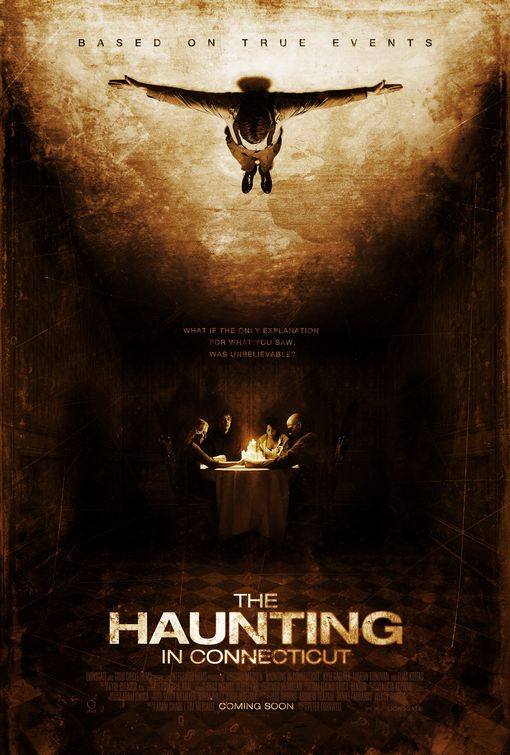 When scary apparitions start turning up around the home, the family does some investigating, with a little help from Matt’s really creepy if not insane fellow chemo patient, Reverend Popescu (Elias Koteas). And they soon figure out that the house was once a funeral parlor where empty coffins still occupy the basement, not to mention a malevolent dumbwaiter.

Then factor in eyelid fetishism, occult regurgitation during seances on rewind, undead wilding, attempted murder by shower curtain, cadaver liberation, and a little nifty house-orcism by the determined reverend, and you’ve got a collection of fairly reliable elements for an unnerving if at times plodding occult thriller. Even if it feels a bit like regurgitating, not just departed souls from the afterlife, but The Amityville Horror revisited as well.