This won’t be the next Goodfellas and we’ve met most of the bad guys before, but there are enough nuances and story twists to keep this character-driven drama fermenting right to the end of its bitter sweet tale. It’s authentic, realistic and suspends our disbelief, which is why we go to the movies in the first place.

Bob Saginowski (Tom Hardy) works for his cousin Marv (James Gandolfini) in a Brooklyn bar. The bar is in the heart of gangster land and is used by local underground bosses as a ‘drop’ point for the cash they raise from their nefarious endeavors. The money is deposited each night and collected the next day but, as many other ‘drop points’ are used, it’s difficult for law enforcement to track who has what and where. 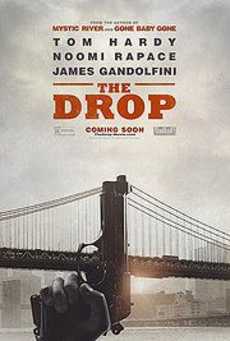 After a busy night, Tom and Marv are about to close the bar when two masked men attack their doorman, force their way in and order Marv to empty the contents of the safe. He does as he’s requested and the thieves take off, but the doorman has been seriously injured and they have to call an ambulance. This alerts the police and they interview both Marv and Bob, who not only have to deal with the unwanted presence of the law, but also with the Chechen bar owner, who is suspicious about Marv and Bob’s involvement in the heist.

The main character in this story is Bob, who acts and sounds a lot like Rocky Balboa, but this comparison fades as he becomes more and more endearing. He lives alone, doesn’t appear to have anyone close to him, and he’s the patsy who’s the first to help the lost, the lonely and anyone else who might need a hand. His role is particularly difficult to pull off as he lacks the qualities of the perceived alpha male, and he’s also struggling under the powerful presence of James Gandolfini, who looms large but never quite manages to steal the show.

This is the last film that Gandolfini appeared in which, of course, makes it something of a collectable, and justly so. Gandolfini struts his gruff stuff with his usually aplomb but he’s also given a few chinks in his armor, so when he does the grisly things that gangsters inevitably do, it’s somewhat surprising and easy to excuse. Even more interesting is the fact that he’s also something of a victim himself, in more ways than one.

There is very little back story about any of the characters, and the only factual history supplied is that Marv once owned the bar he and Bob work at, but it was virtually taken off him by the new boys on the block; the Chechens. Would the robbers and murderers of Brooklyn really allow this to happen? Can you imagine Tony Soprano being elbowed out by anyone, even if they showed up with an entire army? Of course not… which is why he was always so great to watch.

To see the trailer of The Drop: