As everyone starts to get it that hybrid is the way to go in an overused planet depleted of its resources, the same may definitely hold true for the increasing creatively bankrupt cookie cutter blockbusters, if The Dark Knight is any indication. Here the brash, innovative impulses of the imagination reign over the usual futuristic hi-tech hardware obsessions, while dabbling adventurously in the multiple genres of action, horror and psychological crime thriller all at once. And that effectively renders this differently conceived Batman mostly mystifying for the two and a half hour duration.

Boldly re-imagined as opposed to sequelized, Christopher Nolan’s followup to his 2005 Batman Begins is refreshing in concept and chilling in its gripping authentic terror running nearly counter to comic book far-fetched fantasy. Nolan, along with co-screenwriter sibling Jonathan, pulls off a scenario with many basic elements intact, while shifting into a sinister urban reality playing out in a gritty, solidly effective gloom and doom, in-your-face IMAXed Chicago. And all the more terror stricken for not resembling an unrecognizable sci-fi mindscape. 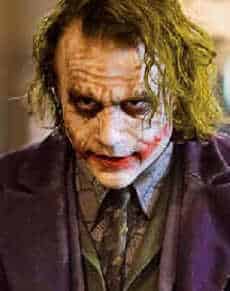 And without question one of the most demonic forces and pure incarnation of nightmarish, determined evil among classic movie villains – conjuring Phantom of the Opera, James Cagney and Hannibal Lecter all at once – Heath Ledger as The Joker’s self-mutilated danger junkie chaos freak in hellish warpaint may be gone, but will certainly never be forgotten. His challenge to Batman to reveal himself or have the city face the threat of multiple serial hit-and-run homicides, is a deadly, demented contest of psychological wills and social territoriality in a metropolis at risk, as well as who gets to dominates the screen.

And this misery loves company, harm for harm’s sake Joker isn’t joking when it comes to threatening that dramatic balance of power, while laying the blame on his devil made me do it bad childhood. Though Christian Bale here as a character compromised by multiple personalities and nearly neutralized at every turn by a phantom scourge – very much intended to mirror the present day mass anxiety in response to hide and seek terrorism – holds his own with a willful but confused, introspective intensity.

Fans of more conventional comic book chaos and its hyper-surreal shock and awe unfolding in radically nonexistent realms, may come away from The Dark Knight feeling a little deprived of their mega-fantasy fix expectations. But audiences craving character depth and a clash of potent personalities along with the weaponry – with credit all around to Gary Oldman, Morgan Freeman, Maggie Gyllenhaal, Michael Caine and Aaron Eckhart’s tragically creepy Harvey Dent / Two-Face – will likely turn out in droves to this mix ‘n match classic comix extravaganza, that so stylishly and skillfully reconnects the fantastical to the real world.

In any case, this brooding meditation on self-loathing, disfigurement, masks as elusive disguises, and not unrelated twisted states of reality as a contagion on both a psychological and mass level, set up a haunting brew of a visual feast in a fusion of dreamscape and cityscape. Topped off by Heath Ledger’s invocation of The Joker’s weirdly visionary reflection that cannot be easily shaken, “Whatever doesn’t kill you makes you stranger.” Freaky food for thought, indeed.