In this big screen romantic tragedy revolving around an undocumented north of the border crossing in reverse, believe it or not, Mexican writer turned director Guillermo Arriaga (Babel, 21 Grams and Amores Perros) likewise crosses borders in a kind of Americanization of the telenovela for The Burning Plain, with decidedly mixed results. And though Arriaga’s knack for building suspense is somewhat more effective than the ability of the clueless New Mexico police in this story to deduce what went down in the desert one fateful day, the star-studded multiple mysteries on hand limp rather than leap to the narrative finish line.

Charlize Theron takes initial center stage amid these constantly shifting storylines as Sylvia, an Oregon boutique restaurant manager who moonlights as a cranky one night stand sex junkie. Okay, we get the message already, sex feels worse than chemotherapy, but you just can’t help yourself. And while snapping at her latest conquest to get lost ASAP, the morbid nymphomaniac smokes nude at her window, grossing out a family passing by. 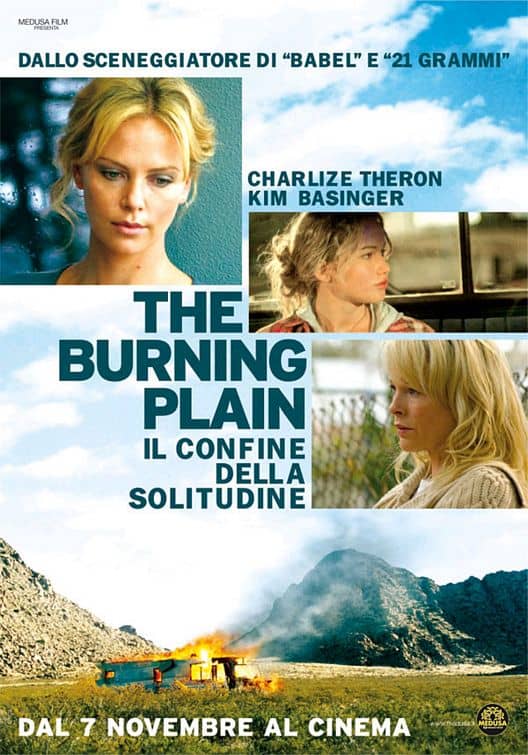 In a parallel narrative thread, New Mexico housewife Gina (Kim Basinger) is repeatedly dodging her spouse and brood of kids with lame excuses, while she sneaks off into the desert for broken down trailer trysts with Latin lover Nick (Joaquim De Almeida). But her teen daughter Mariana (Jennifer Lawrence) is soon wise to her, and follows Mom on her bike to confirm her mounting suspicions.

While in a third intertwined story, Maria (Tessa la), a young motherless Mexican girl who lives south of the border, witnesses the plane crash of her crop dusting dad. And in the meantime back up in Oregon, the only male around who may not be stalking Sylvia for sex (Jose Maria Yazpik), is definitely stalking her around town, for reasons which may clear up some of the aforementioned matters.

The Burning Plain is teeming with emotional tensions and poetically conceived atmosphere. But like its contradictory title, the incendiary passions fueling this story pretty much fizzle out in the end, concluding with a disappointing sense of extended emptiness established by too many loose ends, tied up far too neatly and conventionally.