It is 2043, several decades after a war to end all wars which has left America a vast, violent wasteland devoid of infrastructure. In the wake of the devastating catastrophe, civilization has been replaced by a desperate, lawless society where life is cheap, and a man might lose his life over a glass of water, a piece of food, or even nothing at all.

In the case of Eli (Denzel Washington), the only item for which he is willing to die is the thick, leather-bound book he keeps carefully-wrapped in cloth and tucked away inside his weather-beaten satchel. Except for the telltale cross on the cover, and his occasionally spouting scriptural-sounding aphorisms like “Do for others more than you do for yourself,” he does an excellent job of hiding its contents.

For the past 30 years this Eli has been walking westward by foot to deliver the precious package to a mysterious man located in the City of San Francisco. As it turns out, this is the only Bible left in existence, and the guy he’s going to meet happens to have a printing press. 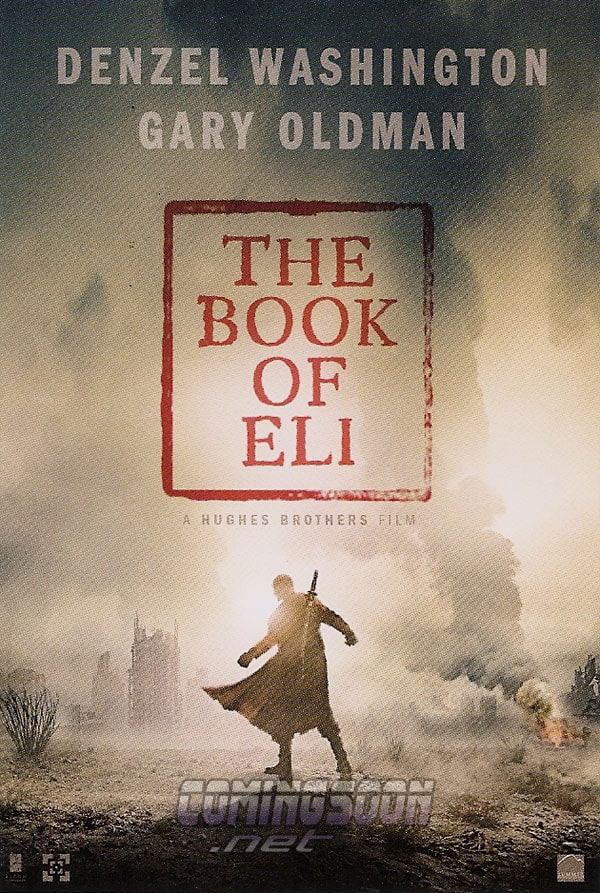 So, because this peaceful warrior knows the sacred text represent the last hope for Christianity, he is willing to fight anyone who might dare try to prevent him from reaching his destination. And when you’re negotiating your way some 3,000 miles on foot through a gauntlet of marauding gangs and bloodthirsty miscreants, this means Eli frequently has to put aside his inclinations to turn the other cheek in order to kick butt.

Directed by the Hughes Brothers, The Book of Eli is a relentlessly-grim and gruesome, post-apocalyptic saga sort of reminiscent of another recently-released adventure, The Road. This one, however, arrives imbued with heavy religious overtones designed to appeal to the Born Again demographic, at least those who could care less about the 6th Commandment, “Thou Shalt Not Kill.”

Eli proves to be ne righteous dude, especially after the plot thickens when Satan incarnate (Gary Oldman) catches wind of what’s in his knapsack. Will that character, Carnegie, and his cronies be able to wrest the Bible away before Eli reaches what’s left of ‘Frisco? That becomes the pivotal issue at the heart of the faith-based morality play.

Despite Denzel Washington turning in a trademark, charismatic performance underscored by appropriately monochromatic cinematography, the film is still surprisingly unengaging. Even the inclusion of a mother-daughter team of fetching damsels-in-distress played by Jennifer Beals and Mila Kunis didn’t help. Maybe it’s the fact that the resolution, which I won’t dare spoil, is such a multidenominational cop-out.

Jesus as the answer, along with a bunch of other prophets.

To see a trailer for The Book of Eli, visit: