Stuart (Steve Martin), Brad (Jack Black) and Kenny (Owen Wiison) are all bird watching hobbyists and, for their own personal reasons, decide to compete in The Big Year, which is a competition to see who can spot the most birds in one twelve month period. Kenny already holds the world title but is desperate to defend it. He meets the other two when they make their first trip across country, each hoping to out-smart the others.

Apart from having no story, no real characters, no believable dialogue or funny lines, what is wrong with this film is that it stops and starts, which makes it impossible for tension to build and so it never feels like there’s a real competition going on. The three meet on a boat, go somewhere snowy, see some birds, and then they all go home again. Once home they spend some unremarkable time with their families, which is completely unrelated to anything else, and then they all rush off to look for more birds. Well, actually, they don’t have to rush as, in this film, once spotted, birds hang around on the same branch for days, giving the guys enough time to catch a plane from another state, arrange local transportation on landing and then show up to take a pic. 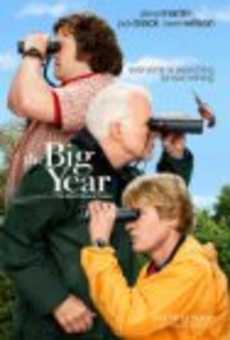 The time the three spend with their families is largely unremarkable due to the fact that their situations are all painfully cliched. Stuart has a doting wife, a successful business, and the most exciting thing that happens to him is that his daughter-in-law has a baby, who they name Stuart. The big decision then is whether to stay at home and have regular access to said child, or go looking for more birds. The other two have equally mind-blowing decisions to make; Kenny’s is whether to go to the clinic with his wife for her fertility appointment, and Brad’s is…… well, actually, he doesn’t have a decision to make, he fits his job in with his jaunts, but whines that he hasn’t got enough money to stay in the competition, at which point his mom gives him an Amex with a $6,000 credit balance and sends little soldier on his way. He’s 36-years-old, by the way.

The finale of The Big Year could possibly be the most undramatic ending in movie making history. Stuart looks in a magazine, then calls Brad to tell him how the three of them did. Just to make sure you don’t go to see this film I thought about including these results as a spoiler, but I figured if you’ve read this far, your mind’s already made up, and my work is done.