Just as formidable as fighting crime Spidey’s way in the new and occasionally different The Amazing Spider-Man, is spinning a tale that captivates in a really crowded field of comic book derived action blockbusters. But this reboot of a well worn classic does bring something rare to corporate filmmaking. Namely, with the input of indie director Marc Webb ((500) Days Of Summer), lots of heart amid the loads of hi-tech mechanical wizardry.

And that is helped not in the least, in bypassing a celebrity status actor as the main course, for Andrew Garfield. Which avoids the frequent extra-curricular challenge, in this case the enhanced without benefit of steroids high schooler, of doing battle in a way with oneself, in a toe to toe between superhero and superstar offscreen. 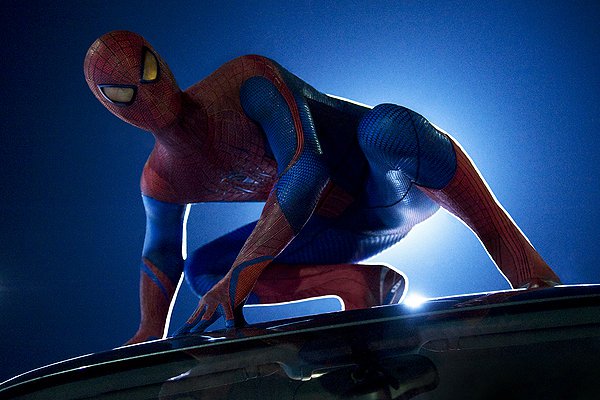 In any case, an homage to the original comic book yarn remains pretty much intact, in a distraught young male world of powerless patriarchs and bad dad father figures. Along with that teen angst, sometimes I feel like a fatherless child vibe.

Garfield smoothly inhabits both Peter Parker and Spider-Man with a winning combination of humility, light humor and stylish intensity that bypasses any of the usual star power self-consciousness. Subjected to nasty bullying at school, especially at the hands of the simple minded hunk played by Chris Zylka, Parker astonishes himself as much as he does his ensuing villainous victims, with mysteriously miraculous new physical powers. And following that mixed blessing bite by a lab spider while investigating what might have befallen his deceased dad at the suspect cross-species experimental science institute where he worked. But you already know that story, and the movie adds little to that narrative thread.

What does amaze along the way, with comical pit stops such as Parker’s sudden inexplicable fondness for pigging out on frozen macaroni and cheese, is for instance the dual personality’s involuntary beatdown brawl confronting singlehandedly, a posse of menacing thugs riding the train. While potentially dispensing tips for audience subway survival, who knows.

So how does this Spidey incarnation measure up to all those previously preceding men in tights screen superheroes? The sheer sense of youthful invincibility and euphoria tempered by literal and figurative flight brought down to earth by something as mundane as remembering to pick up organic eggs for Aunt May (Sally Field) during time out from saving the world, is in large part worth the price of admission.

Or more to the point, close to the final fadeout of this top heavy special effects blockbuster with whimsical indie sensibility, a class lesson that says it all. Telegraphed to the students and the obsessive bells and whistles moviemakers out there alike, as back to basics advisory: ‘All stories have only one plot- Who Am I.’

Trailer of The Amazing Spider-Man: