Musical Documentary Examines the African Roots of the Tango.

The tango is made up of three sadnesses, three memories. The immigrant’s sadness. The gaucho’s sadness, the people who lived in the country. And finally, the blacks sadness, who didn’t come here as immgrants, but who were brought here, leaving their lives in Africa.

Most people think that the Tango is a South Amercan dance. They are wrong. In Congolese, the word “tango” means “sun.” Now you know that derivation, you are one of the few who know that the dance thought of as South American has it footprints in Africa.

The mission of Tango Negro is to pass that message on. The documentary is a labor of love that marks the writing and directorial debut of Dom Pedro. A very interesting thing, that you could say is educational, is that Argentina, the country most of us closely associate with Tango, has not freely admitted its African heritage.

In the time of slavery, there were many blacks in Argentina. Post-slavery, there was a massive purge of blacks, and therefore, by the early 20th Century, the region became noticeably white. During that period, the descendants of Congolese slaves were being slaughtered or run out of the country, and at the same time, immigrants from Italy, France, Lebanon and Syria ere being encouraged to settle there.

The premise in Tango Negro is that “the history of the Americas is an absolute lie, from the extermination of the indigenous peoples to the destruction of African cultures.” The documentary puts forward the view that this shameful legacy “will have to be acknowledged for reconciliation to occur.”

So where does the Tango come in?

This informative documentary shows more than an expose of previously unacknowledged history. There are many songs and Tango performances. Letting down the whole production is the poor quality of the musical rendition. In fact, the music is the low point of the picture.

Even so, director Dom Pedro gets three “Ole’s” for daring to raise these taboo subjects right in Buenos Aires, an ethnically-cleansed area where there are very few dark-skinned citizens.

In Spanish, French and English with subtitles 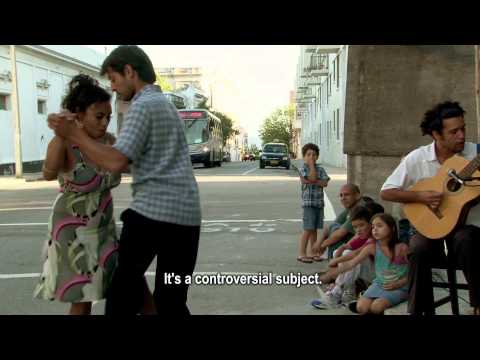