Tongue in cheek, malevolently masterminded by writer/director James Gunn (Slither, Tromeo And Juliet), himself spawned on to the big screen as irreverent apprentice over at Troma Studios, Super digs deeper into action hero dark sides than any predecessor imaginable. Rainn Wilson is Frank, a sulking short order cook whose recovering drug addict wife Sarah (Liv Tyler), a waitress at the diner, runs off with her surly dealer Jacques (Kevin Bacon) after he stops by uninvited one day to grab some of Frank’s breakfast.

Distraught and failing to convince the cops that Sarah was abducted – they lean more towards the idea of self-kidnapping – Frank is encouraged to heal by bonding with a pet rabbit, but opts for comic book fantasy-fueled vigilante crime fighter sublimation instead. This, after motivational visits from Jesus at home, and an urge to vanquish evil gleaned from catching cautionary episodes of The Jesus Network’s Holy Avenger. Who specializes in averting the demonic spread of lust dust around high schools, that is intended to perpetrate premarital sex among matriculated minors. 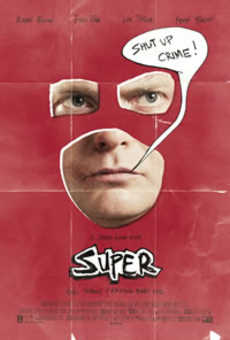 Enter Libby (Ellen Page), the kooky neighborhood comic book store clerk who guides curious novice Frank through the intricacies of superhero powers and crusader fashion statements. And nifty weapon accessories when superpowers don’t seem to be kicking in at all, during self-appointed drug busting missions in the hood. Eventually Libby gets hip to the suspicious pudgy geek as the actual legendary, overreacting bad guy beater vigilante dubbed Crimson Bolt. Whose fondly embraced motto when staked out on one of his serial murder sprees, is ‘Shut up, Crime!’

And wanting in on the gruesome homicidal action too, girlish Libby pathologically reinvents herself, much to Frank’s dismay, as his sidekick Boltie. While at the same time, the vicious pixie resolves her out-of-control enthusiatic crush by raping the revolted, by now monkey wrench wielding sidewalk superhero.

Super descends into ever more sadistic and bloody, way beyond Tarantino-esque territory, without ever wavering from its cartoonish, increasingly awkward comic flourishes. Whether with religiously rooted relish while brutally stomping to death somebody for cutting into a line, or bashing in the head of a very possibly innocent victim suspected of keying a car. And kind of an in no way coincidental, exceedingly uncomfortable counterpart of what goes down in the real world. With the gleeful spin in the media promoting the covert war on terror and target assassinations, or the massive bombing and destruction of other countries by the US as crusader policeman of the world.

Now Super in my book, could have rated a perfect four out of four. If only Gunn, unlike his seriously insane superhero, could have reigned himself in with his racist caricatures. Which shamelessly tag all the black characters as violent drug dealers, sexual assailants of white women, and bottom feeder morons.