Each to his own homages. But when it’s hard to tell whether Sukiyaki Western Django is a Samurai genre ripoff of the Spaghetti Western or the other way around, the problematic issues in a movie go way beyond which cowboy will or won’t be the last one standing. And substituting sukiyaki for spaghetti (or the other way around) as the metaphorical and otherwise cuisine of choice between retro and futuristic boy toy deadly weaponry Wild West shootouts, is the least of it. 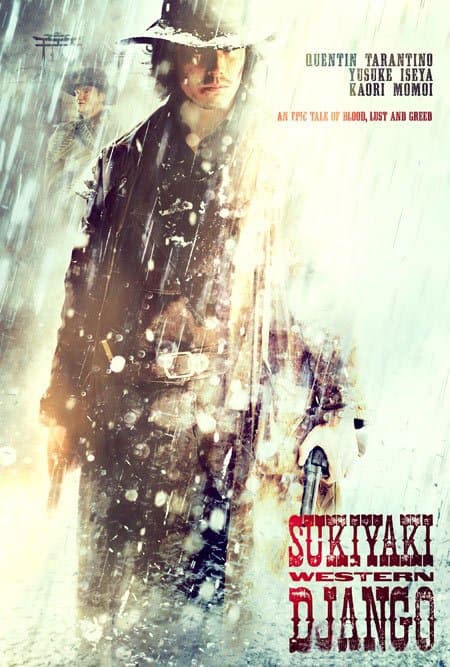 And when a mysterious stranger (Hideaki Ito) saunters into town with his own agenda, he proceeds to manipulate the two enemy camps, with deadly consequences for all. There are also a couple of feisty females on hand, who for a change get to show off a little of their own stuff in this traditional exclusively guy terrain.

But far more inscrutable than the meandering plot culminating in multiple overkill shootouts, is the heavy on the accent English language dialogue spoken by Japanese actors, without benefit of subtitles. Meanwhile, Quentin Tarantino shows up sporadically as Mythic Gunslinger Piringo, the narrator speaking in (likely inscrutable) Japanese, at times without benefit of subtitles. And who changes his name mid-narrative to Henry after being enthralled a bit by Shakespeare, and woe to him who calls Henry anything else ever again.

Though Tarantino does seem to have an impressive knack for shooting snakes, and eating their hearts out. But don’t serve up this sukiyaki perfectionist any badly cooked bean curd over the campfire, as one unfortunate female finds out when he beats her butt for less than stellar cooking skills.

As for the Django portion of the title of this all style and little substance post-Samurai, Wild West anger mismanagement outing, the reference is to a 1966 cult Italian Spaghetti Western directed by Sergio Corbucci and starring Franco Nero in the title role. In any case on the positive side, there are some significant few and far between, alternately visually charming and nutty moments in the movie, ranging from a fetus astonishingly rising out of a rose, to a split personality varmint (one of which may actually be a female) into beating himself up in numerous creative ways. Not to worry, his/her mental condition isn’t nearly as schizophrenic as this movie.