In a case of more spin than spinning, the raw race conversation-driven drama Spinning Into Butter taps into timely issues touching on diversity conflicts that persist in this country. But sorry to say, Spinning Into Butter is no Crash, and comes off more as good intentions dissipating into irresponsible moviemaking.

Sara Jessica Parker delivers a top notch performance worthy of a better film, as Sarah Daniels, a new dean of students at a rural college in Vermont that has only recently played catchup by recruiting students of color into their traditionally white bread milieu. Sarah has just quite her job at a rough ghetto high school in inner city Chicago, and the rookie on campus has some troubling secrets about her experiences there, that she’s doing her best not to share.

There’s also a tentative racial harmony at the college which is more in the nature of a fragile truce. That is, until accelerating hate crimes materialize against a black student, beginning with anonymous racist notes left on his dorm room door, and progressing to a hangman’s noose left outside his window.

Sarah wants to report the shocking incidents to the police, but the smug and dismissive dean of the college (Miranda Richardson), along with her administrative colleagues, is adamant about keeping matters hushed up, so as not to adversely affect her own priority, financial donations to the school. The student himself (Paul James) is also unwilling to come forward publicly and cooperate, or even change his single room to a more protective shared space, because he insists that anything less than stoic defiance would be akin to cowardice and defeat.

What eventually does shake up the campus, is the arrival of Aaron Carmichael (Mykelti Williamson), a persistent local African American reporter who publicly breaks the story, much to the dismay of the college authorities. And he’s also intent on ferreting out the perpetrator. The multi-tasking Aaron makes a play for Sarah as well, who repeatedly rejects the advances of this can’t seems take a hint kind of guy.

Meanwhile, the student body is drawn into open racial warfare, and an increasingly uncontrollable state of affairs. And many of these highly charged verbal confrontations give rise to long overdue candid multi-cultural dialogues that are rarely touched upon in this society, whether on or off screen.

The problem is that once unleashing this emotional hornet’s nest, the filmmakers seem at a loss as to what constructive direction to follow, and with an ultimately out of control script not unlike the chaotic campus itself. But far worse, is the more reckless than meaningless nature of resolutions served up. And this unfocused state of affairs has little to do with the production being a talky adapted stage play.

Without saying much more about the demoralizing nature of the surprise elements introduced into the story, racism ends up being presented as a state of affairs that people of color, in particular African Americans, have brought upon themselves. And this damaging perspective, however fictional, is not so different from Holocaust deniers who claim that the orchestrated Nazi genocide is a fantasy concocted by Jews in the service of various ulterior motives. 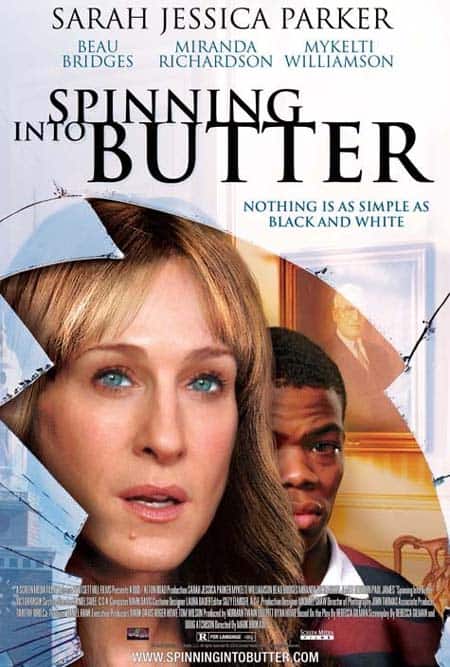 Perhaps a key fault with this deplorable production, is that the director (Mark Brokaw) and screenwriters (Doug Atchison and Rebecca Gilman, based on the play by Gilman) are all white. What clearly seems to be problematic here, is the one-sided, lack of multi-cultural participation in shaping this story, which was really essential considering its subject matter. Why advocate dialogue across racial lines in the movie as remedy, but nowhere in the conception of the film?

As the result, the pronouncements of the white characters, whether meant as positive or negative, range rather narrowly from patronizing to insensitive. Then factor in a wrongheaded approach of equal opportunity fingerpointing to go around when it comes to racial antagonism. That is, all things being equal, which they never have been, socially or economically.

And a glaring point in evidence, the embarrassingly racist unrequited romantic pursuit of the evidently displeased white dean by Williamson’s character. Not to mention a case of really bad timing, with the laying of the worst blame against whites for racism during Womens History Month, on the principal female characters. Filmmakers please, go back and do your homework, so you can take a better look at the record and exactly which gender has been most historically responsible for the kidnapping, bondage, racial violence and division in this country.