The arty blockbuster has apparently arrived with Speed Racer, and it’s as flashy, accessorized and auto-erotic as can be. And no surprise there since the Wachowski brothers (The Matrix, V For Vendetta) are at the controls, refashioning the movie screen to function more like a portal into a video game in progress. And with the cars decked out in high style as if part of a costume ball down a runway rather than a raceway.

Based on Tatsuo Yoshida’s anime classic, the movie pauses on occasion from endless rounds of psychedelically gleaming car-nivals to shed some secondary light on the looney tunes Racer family. They’ve been dabbling in mom ‘n pop race car designing and championship competitions over several generations and think of little else, even the obsessed chimp house pet.

Speed Racer (Emile Hirsch) is a young man determined to follow in the footsteps of his idolized late elder brother Rex, who died in a fiery crash on the track. Presiding over Speed’s loving if somewhat peculiar family is Pops Racer (John Goodman) and Mom (Susan Sarandon), who coos a lot and exclaims with wide eyed wonder how Speed’s daredevil race stunts take her breath away. Then there’s Speed’s adoring girlfriend Trixie, demure and perky in bangs and sensible outfits, and demonstrating a mean right hook with anybody unlucky enough to insult her man. 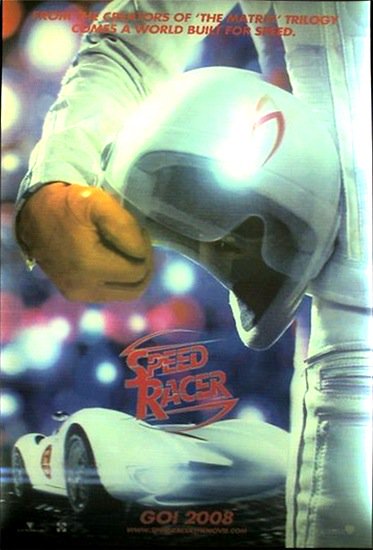 Life is an endless joy ride in those super-flashy boutique boy toys, so to speak. That is, until racetrack robber baron Royalton (Roger Allam) turns up and demands that Speed be part of a big bucks fixed competition, or else. But help is on the way in the person of mystery masked man in leather, Racer X (Matthew Fox) in league with the Corporate Crimes Division. And he’s got more than a few neat moves on the track to run sufficient interference on the filthy rich commercial sponsor baddies.

In contrast to its conventional family story, Speed Racer seems to exist in an alternate universe of total fantasy car worship, with paint jobs ranging from ruby red to shocking pink and everything in between. Which creates a strange overall sensation indeed, that it’s not just the cars that are smoking, but those peculiar Wachowski siblings too, and whatever it is that’s in their pipes too. Then there’s the contradiction of an glossy ambiance steeped in materialistic reverence for cars, that seems at odds with the anti-corporate thrust to this tale.

Add to that a head-to-toe leather clad superhero bearing a strong resemblance to one of the Village People, racers acting more like pro-wrestlers, and competitions that seem at times more about the bling than the accelerators. A circular road movie journey that may be a tad too trippy for some tastes, while a high energy kaleidoscopic delight for others.