Born in South Bend, Indiana on July 30, 1964, Vivica Anjanetta Fox is of both Native and African-American heritage. After graduating from Arlington High School in Indianapolis, she moved to California to attend Golden West College just south of Los Angeles. Since earning an associate’s degree in Social Sciences, she’s embarked on an enviable showbiz career which began with bit roles on such daytime soap operas as Days of Our Lives, the Young and the Restless and Generations.

The 5’7″ fashion plate parlayed that success into appearances on sitcoms like The Fresh Prince, Family Matters, Who’s the Boss and Martin. Next, she made the jump to the big screen, landing her big break opposite Will Smith in Independence Day in 1996. She subsequently co-starred in Booty Call, Batman & Robin, Soul Food, Why Do Fools Fall in Love, Two Can Play That Game, Kill Bill 1, and Kickin’ It Old Skool. 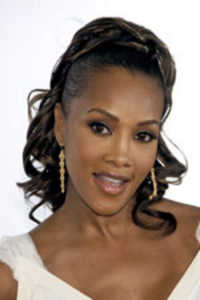 The beguiling vixen has been picked as one of People Magazine’s 50 Most Beautiful People in the World (1997), one of the 10 Sexiest Women by Black Men Magazine (2001), and one of the 40 Hottest Hotties over 40 by VH1 (2005). Here, she talks about her two latest pictures, The Cover, a drama about brothers on the down-low, coming to DVD on 5/13, and Three Can Play That Game, a sequel to her hit battle-of-the-sexes comedy which was released on DVD earlier this year.

KW: What interested you in making Cover, a movie about brothers on the down-low?

VF: I think it’s something that’s been a little taboo in the African-American community. And also, I wanted to take advantage of the opportunity to work with [director] Bill Duke.and some of the other actors who got involved with the project.

KW: Do you think you’d be as supportive of your best friend in real-life as your character was of Aunjanue Ellis’ in this picture?

VF: I try to be a supportive and real friend who would look out for her and tell her the truth.

KW: What do you think a young black woman should learn to do from this film to prevent this from happening to her?

VF: I definitely hope that she would always be inquisitive. If your womanly instinct tells you something ain’t right, girl, check it out. Sometimes, we have a tendency to trust, especially if you’ve been with a man a long time. But you might just want to follow your instincts to make sure that everything is alright.

VF: Yeah, Bill gave me that incredible stat. So, I say, practice safe sex, and look out for yourself first at all times.

KW: Well, Mr. Duke deserves some praise for tackling a taboo subject in making a movie that was long overdue.

VF: It was enlightening and eye opening, wasn’t it?

VF: And scary, but it made you think. That’s why we’re hoping that the word of mouth will spread on this and that people will want to check it out. It has really good acting as well as being very informative.

KW: Have you become aware of anyone being on the down-low in your personal circles?

VF: I have a lot of friends who are in the fashion and entertainment industries, in general. One of the reasons why I like having what I call my gay boyfriends is because they can warn you and keep you in the loop.

KW: Why did Three Can Play That Game go straight to video?

VF: I was disappointed because it was totally funny and really good, and had a built-in audience. But as one of the film’s producers, I was glad that I got the sequel done, and got to employ some African-American actors that I hadn’t had a chance to work with.

KW: What would say are the elements of success?

VF: Yeah, I’m in a good space in my life right now.

KW: The “Realtor to the Stars” Jimmy Bayan question. Where in L.A. do you live?

VF: I live in The Valley.

KW: Thanks for the time, Vivica.

VF: You are so welcome, and spread the word.