This film is described by the filmmakers as a ‘smart action thriller’, which is puzzling, as it’s steeped in sci-fi elements and the only action/thriller aspect is when a train catches on fire and derails. Granted the train is going very fast, but that doesn’t make it thrilling and as regards smart, read on.

Source Code is a government experiment that can manipulate time and can also place the mind of one of their pre-programmed agents inside the body of another person for the last eight minutes of their life. They select decorated soldier Captain Colter Stevens (Jake Gyllenhaal) to carry out their first assignment, which is to find the bomber of a Chicago commuter train.

At the beginning of the film, HQ has placed Captain Stevens in the sleeping body of someone called Sean, but when Stevens wakes up he is totally confused as to who he is and how he got there. This has been done to create tension and drama in the opening minutes but it just doesn’t make sense. How can a secret agent carry out a mission if he’s not in full possession of the facts? If this was the only set-up the writers could think of, they should have made this lack of information a glitch in the software and maybe got a little action going back at HQ. 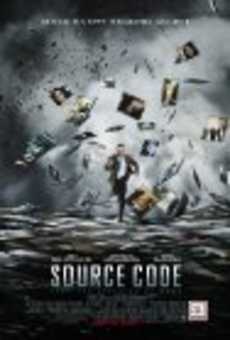 The way the story is set up leaves no room for tension because we know if Stevens messes up, HQ can reset the time and he can go back in and have another go, which is what he does. But with each replay, there are only slightly differing scenarios, and watching someone spill coffee on someone’s shoe six times is really not thrilling. Such tedium could have been avoided if HQ had put Stevens inside each of the other characters, so we could have got to know them all from the inside out, which would have been intriguing.

Not only are all the characters superficial, but their expressions are limited; they’re all either angst ridden or confused, apart from Miss Goodwin, who’s based at HQ and who Stevens skypes between each replay. She remains stone-faced throughout, which means either the director told her that’s how he wanted her to play it, or that she panicked about all those close ups on an unforgiving monitor and got too much botox just before the shoot. Either way, it’s not working.