If the soul lives on after man, then the movie Soul Men could not have been graced with a more fitting title, and one that incorporate by chance those multiple meanings. A showcase for three extraordinary performers – Samuel L. Jackson, Bernie Mac and Isaac Hayes, the movie is simultaneously an unscheduled farewell tribute to the latter two, whose sudden, untimely deaths occurred within a day of each other this past August, prior to what would be their last movie’s release.

The story of two backup singer has-beens of a once popular group who are pressured by promoters to get together again three decades later to pay tribute to their lead singer (John Legend) who just died, Soul Men is a kind of musical memory lane road movie with lots of weirdly comical detours in between. Floyd (Bernie Mac) is a down in the dumps, bored and aimless leisure class insomniac, while Louis (Samuel L. Jackson) is a penniless but proud ex-con cellar dweller.

The reunion of this depressed duo is far from smooth, to say the least. Resentment has barely subsided over the years, in connection with a long unresolved rivalry for the same woman. But those romantic grudges hardly seem to hold sway while the two make their way cross-country in Floyd’s vintage chartreuse Eldorado convertible for the comeback concert at Harlem’s Apollo, as both chase women from town to town, and Floyd keeps popping that Viagra. 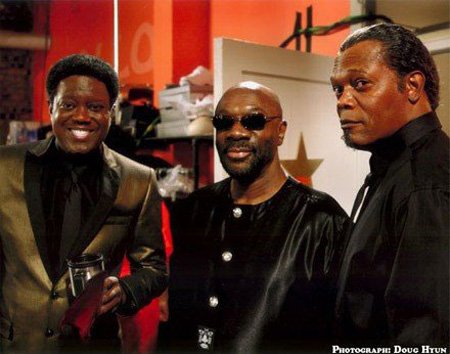 The production could have done without all the crude country yokel jokes as part of the itinerary of this incidental tribute in its own right to Hayes and Mac, but then who knew. Balancing out the vulgarities especially targeting older women for ridicule (okay, we forgive you this last time, Bernie) are musical interludes that just take your breath away. Including an impromptu deja vu rehearsal on a dusty road to ‘I’m Your Puppet,’ a rendezvous with Bernie Mac in a piano shaped coffin, of all places, and Isaac Hayes doing ‘Never Can Say Goodby’ over the closing credits.

Director Malcolm Lee (Welcome Home Roscoe Jenkins, Undercover Brother) has fashioned an uneven but heartfelt homage to two sorely missed entertainers, and to an entire musical generation that created and embodied the notion of soul as a sound and a way of life. Soul Men, a tender, tangy and wild tale in a kooky convergence of music, memory and male bonding blues. And a movie truly about lasting impressions, where you’re very likely to laugh till you cry, when not the other way around.