A film about an obsession with death by asphyxiation, South Korean director Kim Ki-Duk’s Soom also delves into the way sexual fixation gets entangled in this mix, and intended human objects of desire that may take your breath away in more ways than one. A peculiar yet always fascinating filmmaker, Ki-Duk opts for landscapes of silence filled with their own subjective rationale, and meaning derived primarily from the intensity of expression and gesture in the absence of verbal distractions.

Soom, which translates as Breath, plays out in a barren cell on death row in a suburban Seoul penitentiary filled with the condemned, and little else. Among the inmates is Jin, (Crouching Tiger, Hidden Dragon’s Chang Chen) a man who senselessly slaughtered his wife and children, and who repeatedly attempts suicide, landing him in the hospital and on the evening news. Jin catches the attention of Yeon (Zia), a depressed housewife and sculptor who becomes obsessed with Jin after discovering her abusive husband’s infidelity.

When Yeon shows up at the prison demanding visitation rights, the warden inexplicably agrees. As we eventually learn, he happens to be either terminally bored or afflicted with voyeuristic tendencies, and comes to enjoy watching on his surveillance screen what turns into a lusty affair between the two strangers.

Yeon initially plays the role of entertainer for the startled and increasingly captivated Jin, decorating the private visiting quarters with wallpaper and motifs of the four seasons in succession, and wailing out bad karaoke numbers. But Yeon’s apparent designs – beyond her weird interior decorating – to first seduce Jin and then graciously offer some assisted suicide to the depressed prisoner – are complicated by some competition she gets from a jealous cellmate who is also infatuated with Jin. 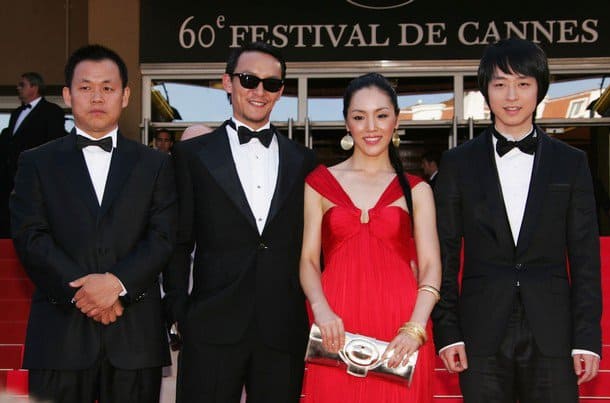 Soom’s ever more far fetched story is also never less than mesmerizing, and exceedingly poignant in its own outrageous way. And his comic touches cut through the sustained creepiness, including the complicated logistics of sex in handcuffs; the pranks of a rowdy bunch of cellmates who might easily be dubbed the Keystone cons; and quite possibly the best line of the year in a movie, when Yeon’s bullying husband berates her for fooling around with the felon: ‘If you’re going to have an affair, at least do the housework.’

Ki-Duk is no stranger to murky but whimsical fare, his famed kinky and quietly deranged sensibility having been encountered before in movies like Bad Guy, 3-Iron, and The Isle. The self-taught filmmaker’s background may offer clues to his temperamental unpredictability, having been everything from a street artist and factory worker to a priest-in-training and soldier.

Kim Ki-Duk’s body of cinematic work is part of a Retrospective at NYC’s Museum of Modern Art, which will be showcased April 23rd through May 8th. More information is online at: Moma.org.