While Harold & Kumar Go To White Castle doesn’t bear much resemblance to its stoner comedy sequel four years later – Harold & Kumar Escape From Guantanamo Bay – there’s certainly lots more to chew on than just apples and oranges, or in this case burgers and bongs.

Kal Penn, the infamous but pretty funny gross-out half of that pair of big screen co-conspirators known as Harold, dished out the pros and cons of political comedy versus just hanging out at White Castle during this conversation, and it didn’t have a thing to do with stuff like freedom fries.

Kal did have plenty to say about weed movies, icon weirdness, racial profiling on and off screen, Howard & Kumar screen masterminds Jon Hurwitz and Hayden Schlossberg acting like complete jerks, and using politics as an excuse to talk dirty about female anatomy. 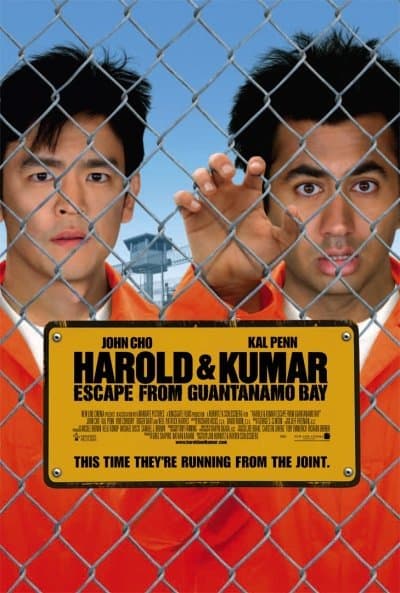 Why this followup reunion at Guantanamo Bay?

How come you picked that political hotspot for fun?

KP: I think it’s great that the film is politically relevant. But I feel our job as actors is to live as realistically in these situations as possible. And I think we all trusted Jon and Hayden to create this world.

You know, the stakes are higher. Which means there’s a lot more fun to have, and a lot more to play with. The backdrop happens to be what’s happening politically in this country, but it certainly wasn’t important to me to have that. It really just uses the current political climate to make vagina jokes.

I see…So what’s the big difference between hanging out at White Castle, than at Guantanamo?

But especially when you’re doing something like a tits & ass comedy, you’re poking fun at human nature. And it’s fun for everybody. You know, it’s not like you’re burdening the audience with it.

I hear your airport racial profiling experience in the movie, is based on something that really happened to you.

KP: Yeah, this guy right behind me at the airport was packing a knife. But I was a big distraction for the guards, because I was the brown dude that they were so excitedly pulling out of line.

And he got through, because nobody was looking at him. Because they were all too busy looking at me. So you sort of see how racial profiling makes us all less safe. And it’s a reality. We’re poking fun at it in a movie like this, and that’s nice. But yeah, these things absolutely happen in real life.

How come you drifted into comedy, instead of going for serious stuff?

KP: I happen to not be pretty enough! But for me, it’s just sort of random that I fell into comedy.

How did the filmmakers ever find you in the first place?

KP: We met at a friend’s birthday party. Jon and Hayden came up to me, and we were introduced. And the first thing out of Jon’s mouth was, ‘whoa, you don’t have an accent!’ And I was a combination of insulted and confused. So I put up my wall and I went, ‘yeah no. I don’t. It’s called acting.’

Then we got to talking, and I read their script for White Castle. They told me the concept and the plotline, and I thought well wow, this sounds amazing. And you’re never going to get it financed!

My only experiences up until that point, had been going out on auditions where I was told that I should go home, put on a turban and come back. And you know, that I needed to do a quote-unquote authentic accent. Which of course only meant an English version of what an Indian accent is supposed to sound like.

So they were these weird conversations that you have with people, about very limiting roles. But when I read the script, I completely loved the idea.

Penn: People who know me, know that Kumar is infinitely cooler than I would ever be in real life.

What research if any, did you do for the movie?

KP: I don’t smoke that stuff in real life. And there was no actual cheetah that we rode. But I think this is more than a buddy movie. Both the first and the second. So for me, that authenticity went way beyond race or riding the cheetah, or being hungry for burgers.

Did it shock you to become an overnight icon?

KP: Yeah. You know, you do these films, which are fairly low-budget compared to a film like Lord of the Rings, and some kid comes up to you on the street and yells a line from your movie that you shot like three years ago. And it takes you a few seconds to realize what they’re doing. So yeah, it’s really weird.

How did all this start for you, were you a funny kid growing up?

What do you think is the most amazing thing about the movie?