When his grandfather (Harry Sterling) has a heart attack while sitting in the balcony during the performance of his latest play, Max Solomon (Spencer Berger) takes it as indication that maybe he’s chosen the wrong line of work. Another hint is that another member of the audience had to ask him afterwards what vegetable was raining down on the stage during the big finale, despite the fact that the name of the production was “The Onion Dance.”

Sick and tired of being a starving writer and having to support himself in a never-ending series of temp jobs, Max decides to mull his options. Later, while being consoled in a diner by his best friends, Tommy (Brian D. Phelan) and Dave (Gabriel Tigerman), he announces “I’m not writing anything anymore,” adding “I’ll never be a writer, because I’m not good at it.” 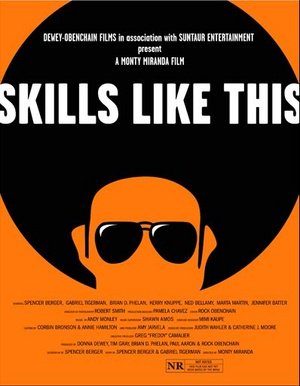 Then, he impulsively leaves his pals sitting in the restaurant and walks directly across the street to pull off a brazen bank robbery in the middle of the day. Not only does he disarm the guard like a veteran criminal but he’s even cool, calm and collected enough to charm Lucy (Kerry Knuppe), the cute teller whose window he holds up for a bag of loot.

After successfully making his escape, Max is elated to have found his true calling. Not surprisingly, Tommy and Dave don’t exactly agree and aren’t thrilled about becoming accomplices after the fact.

This is the wacky setup of Skills Like This, as charming an offbeat romantic comedy as anybody could hope to make on a micro-budget. The movie marks the remarkable directorial debut of Monty Miranda, who collaborated on the project with first-time actor/scriptwriter Spencer Berger. Their endearing crime caper has already collected several awards at the South by Southwest Film Festival, including Best Narrative Feature, and this critic wouldn’t be surprised if more accolades weren’t in order.

As the picture continues to unfold, the plot only complicates further. First, Max picks up Lucy at a nightclub, then brings her home to meet the parents on his birthday when their lusty liaison blossoms into love. She’s so smitten with the easily-identifiable outlaw that she’s willing to risk her career to be around the bad boy with the exploding Jew fro.

Meanwhile, on his own, Max continues to rob other establishments, including a toy store and a Thai restaurant.

The burning question soon becomes whether such a self-destructive path could possibly lead to a happy ending? Certainly, when you consider the fact that the clever screenplay was the brainchild of the star himself, a promising wunderkind clearly quite capable of writing himself out of any corner.

With “Skills Like This,” expect to see bigger things soon from the brilliant young Mr. Berger.