This is an adaptation of a novel that’s described by the film’s Director as a love story, but a more accurate description is dark drama. This genre can be intriguing, but in this case, it’s not. The story feels unsubstantial, the characters are uninteresting and the only message the film delivers is a lesson on how to chop down trees. Unless you need to learn that particular life-skill, I’d give this offering a miss.

It’s 1928 and George Pemberton (Bradley Cooper) is the owner of a major North Carolina timber company. He proposes to Serena (Jennifer Lawrence) and together the two strive to bring prosperity to a business that is burdened with financial encumbrances. Both are fiercely ambitious and it’s their desire to succeed that leads them to make dubious business decisions that could lose them everything. 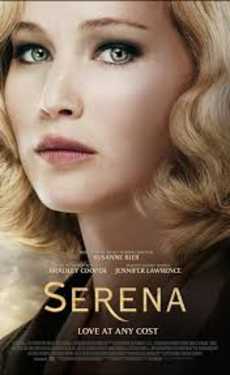 The theme of this story is deadly serious, but when George and Serena first meet, it’s a decidedly lightweight affair. George’s first words to his future wife are, “I think we should be married.” Serena laughs, they have hot sex, and the union is created. To treat this relationship with such flippancy, the writer must have decided that everyone has already seen Silver Linings, and so he picks up from the last scene, with Cooper and Lawrence already united. This sounds pretty dumb, but so is insulting your audience with lazy writing.

After this unsatisfactory introduction, we learn little about the nuances of our hero and heroine, but we do see their actions, which is where the film takes its fatal step away from the Box Office. After a short spell as perfect people in a perfect relationship, which is always irritating, Cooper commits a murder in cold blood, simply to keep his business afloat. His actions are fully supported by his callous wife and the pair carry on as if nothing has happened, which leaves the audience with no one to like, let alone root for. Things become more disjointed as the story progresses and the through-line shifts from being about financial survival to one of personal malice. This is a jarring experience and a good enough reason for the audience to disconnect, if they haven’t already.

Hollywood has a reputation for producing stories with Happy Endings, so how this dark tale slipped through the net I have no idea. Perhaps the industry is so enamored with the over-rated Cooper/Lawrence alliance that they decided anything goes.

When this film bombs, it probably won’t harm the career of either of the actors, but it won’t do much for the audience, who will turn up at the movies expecting a love story but end up with something akin to The Wristcutters; that is, if they’re not smart enough to read the reviews first.

My money’s on the people.