This is a compelling documentary about a long-forgotten musician who, thirty years after he sank into obscurity, discovered that his genius had in fact been heard.

Sixto Rodriquez’ was singing in a Detroit bar in the 60s, when two celebrated producers saw him perform and became enthralled by his charismatic presence, soulful melodies and prophetic lyrics. They, and many others, were convinced that his first album would establish him as one of the greatest recording artists of his time but, incredibly, the album bombed. Soon after this, he got dropped by his record label, and disappeared from the U.S. music scene forever. 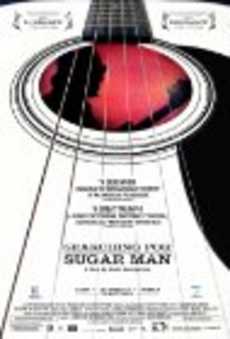 In his wake, stories emanated of gruesome on-stage suicides, some claiming he had shot himself, others that he had set himself on fire. These rumors would have been his only legacy had his album not found its way to 70s apartheid South Africa, where it went viral, and within months he was more popular than the Rolling Stones. His signature song, ‘Sugarman’, became the anthem for the white anti-apartheid movement, and from thereon that is how he was known. Decades later, two fans decided to find out if the rumors about him were true, and their search revealed a story that was a lot more spectacular than any of the myths that had gone before.

Rodriguez was never aware of his success in South Africa because the record company who received the royalties never paid him his dues and, as they are now defunct, it is unlikely that they ever will. Rodriguez’ response to this blatant injustice is a simple, “They gave me my break,” and, in his view, all debts have been paid. Obviously, some people refuse to be tortured, no matter what you throw at them. He has been making money since he began touring South Africa in 1998, but he gives most of it away, and remains totally unmoved by fame, status and anything else that does not offer succor to his soul.

This documentary has been made with the support of Rodriguez and his three daughters, and the latter have a lot of stories to tell about their eccentric, steadfast Dad. There’s a very moving moment when one of them recalls how he would return from work each day, covered in dust and splinters, and that she always knew her father worked harder than everyone else’s. Dad’s humility forbids him from accepting such praise, and his only response is to gently dismiss the compliment as the illusion of a dreamy little girl. Strangely, nothing is revealed about his daughters’ mother, or any other partners, which only serves to make the mysterious poet more mysterious still.

His music is too unique to describe. Some people think it’s got a jazz feel; others liken it to the blues or rock; others describe it as folk music with soul. His lyrics are sometimes political, often satirical, and occasionally simply a lover’s lament, letting us know that his heart, too, has been broken. On one of his songs he confides enigmatically that:

“The sweetest kiss I ever had,

Is the one I’ve never tasted.”

Sixto Rodriquez is now 70 and nearly blind, and has still not been recognized as a musician in his homeland, only in a country a continent away. That particular fairy tale began when two South Africans visited the US and returned home with a bootleg copy of Cold Fact. Cold Fact is now available on Amazon. Listen here: B001BKVWYG