Scott Pilgrim v The World was first a graphic novel series, then a video game, and now it’s a film. So with the latter being enriched by its predecessors, a most original work could have been created. But, unfortunately, it wasn’t. What actually happened is someone wrote an uninteresting drama, added some sci-fi/superpower scenes, tossed in some sequential art and simply let them collide. Rather like getting Pavarotti, Dolly Parton and Snoop Dogg to sing a line each of the same song and expect people to download it on iTunes. It’s just not going to happen. 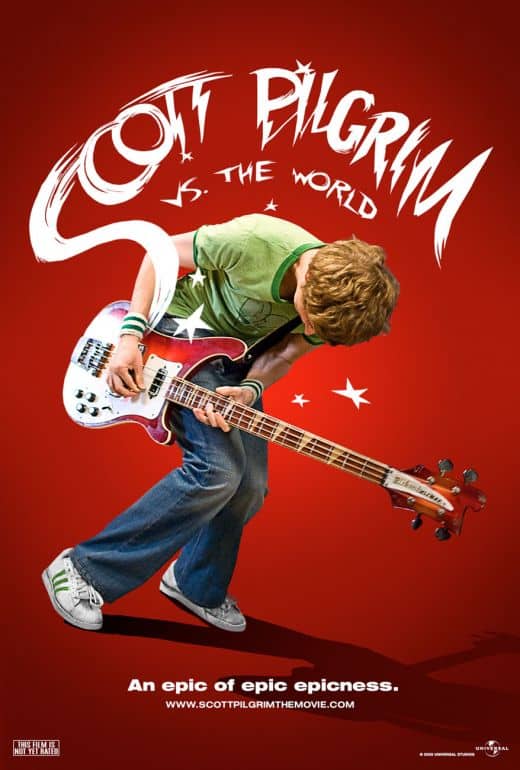 The film starts in a normal world, with hardly any reference to video games, which is pretty uninspired writing. Scott, at least, should be obsessed and these games encroaching on his world, creating some kind of a build up rather than the monotony of going from normal, to superpower, to normal, to superpower, always at the same pace. Also, when the superpower scenes are over, no comment is ever made, even though everyone has seen Scott flying around like Superman. So if special powers in this world can be shrugged off with a ‘So what?’ then the filmmakers must expect the audience to do the same.

For most of the film Michael Cera has that ‘deer startled by headlights’ look, and he’s now played this same ‘quiet nice guy’ character so many times that I’m starting to wonder if that’s the real him and whether he can actually act at all.

The title ‘Scott Pilgrim v The World’ is also a bit of a misnomer. Scott is pretty wishy washy and doesn’t versus anything, including the evil ex-boyfriends, who all come looking for him. His only goal in life is to find a girlfriend, which is hardly enough to drive a film. And I don’t remember him duking it out with seven of Ramona’s exes, but there again, I wasn’t counting – but shouldn’t he have been? Or, if this is a game, shouldn’t the score be on our screens? Something did start appearing in the bottom left towards the end but not for long enough to read so I imagine the filmmakers assume we all have superpowers of our own but if we did I’d have twitched my nose and fast forwarded to the end because this is a very, very long two hours.