Opponents of the Obama universal health coverage plan, beware. There’s a really angry patient with a pre-existing condition who may be coming to get you, at least this Halloween season, with the latest installment of cinematic medical mayhem in Saw VI. Health insurance horror is the dramatic driving force here, and we’re not talking medical malpractice, while death panels and death penalties alike abound in this surgical slasher spree without benefit of anesthesia, and that pretty much goes for the audience as well.

Jigsaw Killer John Kramer (Tobin Bell) is back, and the terminal vigilante cancer patient with hyper-sadistic serial killer tendencies is exceedingly pissed off about his lack of medical coverage. When his crooked health insurance provider denies him benefits for experimental treatment in Norway, Kramer sets up an elaborate get-even torture dungeon ordeal to administer a taste of their own medicine, so to speak. And iinvolving terror via television, and taunting his hostage prey into testing their will to live including sacrificing others in order to survive. There are also some junkies on hand forced to amputate their body parts in a desperate bid to stay alive, and which has absolutely nothing to do with a movie about crash diet weight loss. 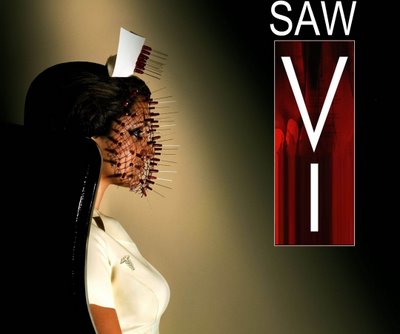 Saw VI is actually best when a combo funny and philosophical gore-ality tale, as the intellectual madman mulls inhumane health care practices in this country that could have Michael Moore cheering for this movie. The media is also the recipient of a painful prognosis from the Jigsaw guy for exploiting his predicament, which may be a subliminal threat to reviewers out there tempted to bash this movie, who knows.

Where Saw VI is far less effective, is in juggling too many genres at once, including horror, noir, and borderline mythological, political and occult weirdness. Not to mention annoying showoff direction by first time filmmaker Kevin Greutert, a veteran editor of the Saw series, and it shows. There’s more constant cutting of footage than of bodies here, and an overbearing soundtrack bullying the audience into what to feel and fear, with the unfortunate effect of seeming more like a ninety minute trailer than a movie.