A sort of tabloid cinema presumably peering into the all surface and no substance pathological lives of the rich and infamous, Savage Grace manages to be tasteless, titillating and dull, all at the same time. Not to mention that many of the true cultural and class details surrounding these upscale real life scandals, if the filmmakers had bothered to include them, would have made for a far more bracing story.

Based on the novel Savage Grace by Natalie Robins and Steven M.L. Aronson and directed by Tom Kalin (Swoon), the film wallows in the sordid, superficial circumstances surrounding sexual perversion, insanity and violence in the prominent jet-setting Baekland family during the mid-20th century. These dark deeds seem to be precipitated by the excruciating tedium and boredom of the idle rich, with too much money and time on their hands. 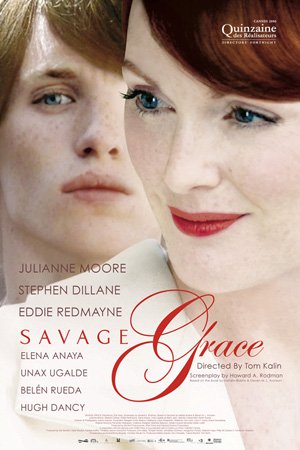 Julianne Moore is Barbara Daly, a dazzling model who marries wealthy trust fund baby Brooks Baekland (Stephen Dillane), and adapts with difficulty to his entourage of pretentious and purposeless swells. Increasingly alienated by this insular and asphyxiating social milieu, Barbara begins deteriorating mentally, and is drawn into an unhealthy, emotionally dependent bond with their only child, Tony (Eddie Redmayne).

No need to figure out where this maternal relationship is headed, when she announces to the impressionable schoolboy, ‘Will you still love me when my hair is gray and my tits are sagging,’ and later at a dinner party orders the child to recite to the guests from a Marquis de Sade novel. And Barbara for her part, tends to jump into whatever nearest car in the vicinity to run off for some hot, anonymous sex with the motorist stranger, whenever she and the hubby have a spat.

And when Tony reaches young adulthood during the permissive ’60s era when ‘nothing is forbidden,’ Barbara does pot and drugs with her son when not seducing his homosexual lovers, and diving into bed with both of them on occasion. Meanwhile, Dad has run off with his son’s former teenage girlfriend. Eventually extreme decadence segues into collective insanity, and without a hint of psychological motivation or reflection around.

Regrettably, a more fascinating potential story could have been gleaned from the real facts surrounding this family saga, and not just the salacious ones. What were the relationships and frictions of this mixed-class family with their servants and employees. And Brooks’ real life stern and disapproving father who never figures in the narrative, renowned inventor Leo Baekland, was actually from exceedingly humble origins, an immigrant son of a cobbler and maid. Therefore the younger Baekland and his family would have been considered nouveau riche, and pariahs among the old money elite they aspired to join. And senior Baekland’s own personal, far more intriguing story, included his invention of Bakelite that ushered in the age of plastics, was responsible for radios, telephones and electrical insulators, and was a discovery eventually acquired from him by Kodak for the development of modern photography equipment. A missed dramatic opportunity, indeed.

Be forewarned, watching this movie about the frustrating, bored to tears existence of the elite, can be contagious. A depressing and meaningless, smutty glimpse into the depraved family lives of stuffy designer couch potatoes.