Robin Hood robbed the rich to give to the poor, but tales of how he started on his altruistic path differ. Some claim he was a Yeoman, driven to crime by the rule of the rich (the UK was obviously right wing in the 12th century), others say he was a deer poacher and became an outlaw because the deer were the property of the King. But now Ridley Scott has come up with a politically charged version that not only romanticizes our hero’s story, but also mocks the British monarchy and bashes the French at the same time. How smart is that?

When Richard the Lionheart dies in one his many crusades, his younger brother John inherits the crown, but unfortunately John is incompetent and feckless and the British Empire crumbles under his ineffective rule. Despite this, Robin Hood, an ace but lowly archer, remains a loyal subject and when the French launch a surprise attack it is the Deer Poacher who rallies the troops and saves the Brits from a diet of frog’s legs and over-processed goat’s cheese , not to mention having to put up with the Germans a few years later. 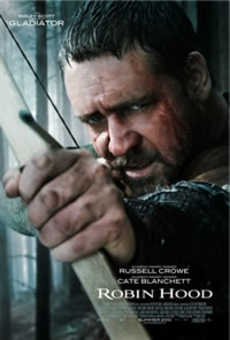 There is a real sense of Mediaeval England in this film, the characters are intricately woven into a well crafted story and the writer never lets our hero fall into the realm of Superhero, which is a refreshing change. There is, however, a problem with the accents. Crowe starts off as a ‘By Goom’ Northerner, slips into the Queen’s English (I know Americans call it the King’s English but when Lizzie’s in charge she gets the credit) and then does a perfect impression of Paul McCartney. There is a Welsh man in Robin’s Merry Band (which is unlikely as the Welsh don’t like being bossed around by the English and won’t even support their football team) who has very little dialogue but still manages to lapse into Irish, and although Cate Blanchett utters her northern accent perfectly for the first line, after that it more or less disappears and you wish she’d stayed with her Britishized Ozzie brogue. Universal claim the budget is $127 million but a savvy LA based newspaper (www.thewrap.com) assure us its $237 million, and they’ve never got it wrong before. So with all that dosh floating around, why didn’t the producers pay a couple of Brit Northerners and a Taffy to hang around the set and correct any straying into the wrong verbal territory?

Although there is plenty of chemistry between Crowe and Blanchett, I don’t think the latter exudes sufficient charm to fill the shoes of the fabled Maid Marion. But the Director does give us an interesting take on the original gentle beauty, who blessed the poor, donned a felt cloak and kept her hood ever ready to hide her blushing cheeks should Robin get a little too close. This new-version broad is a little short on femininity and the first time we meet her she’s advancing on some locals, sharpened staff in hand, cursing like a sailor, and when she stabs an invading gendarme right through the neck you get the feeling she probably enjoyed it.

All in all, it’s an excellent yarn and another plus is the absence of special effects. You might think this is an obvious choice for a story set in the Middle Ages but this is Hollywood and I’m sure the Director got some funny looks in the canteen when the producers found out he was making an action film without so much as a sparkler to crazy-up Robin’s whittled arrows. Well done, Mr. Scott, for keeping it real.