The exotic feathered creatures in this 3D extravaganza are visually stunning, the scenery is magnificently depicted and the cast is littered with stars but somehow it becomes duller and duller by the minute, ending up as yet another big budget cavalcade with plenty of sizzle, not much sausage and, despite its genre, not one funny line.

Blu (jesse Eisenberg) was saved by Linda (Leslie Mann) from animal smugglers as a young chick and the two have been devoted to each other ever since. They both believe Blu is the only surviving blue macaw in the world, but then learn he has a female counterpart, Jewel (Anne Hathaway), living in Rio de Janeiro. They head off to these exotic lands but, not long after they arrive, Blu and Jewel are kidnapped by animal smugglers and the adventure begins. 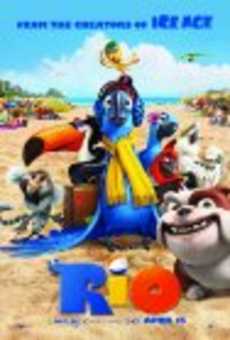 This film has no idea what it wants to say and there is an air of vagueness that flits in and out of scenes, an example of which is when it’s hinted that Linda is hiding behind her relationship with Blu to avoid living in the real world. This raises an expectancy that this will be part of the Rio story but all that happens is that Linda hangs out with a bird geek and her problem is never resolved or even defined. This hazy storytelling is particularly apparent in the final scene, when it’s not clear what Blu’s plans are and how Linda’s relationship with her treasured pet will continue.

Despite enormous opportunities created by the animators, none of the characters are brought to life and in particular Jewel, Blu’s love interest, is completely wasted. Jewel has been captured after living in the jungle all her life and, although she is critical of Blu’s domesticated life-style, her untamed soul is desperately underplayed. She could have been the Boadicea of the Bird Kingdom, and hit us with her sassy back-talk and raged at the indignity of having her crazy blue wings clipped by a human, with whom her tame counterpart conspires. Also, Jewel and Blue are never invited to comment on the looming extinction of their race which is the essence of the story and thus in desperate need of a point of view.

Children will be entranced by these talking birds in whatever dimension and on whatever size screen they watch them, and as the producers didn’t feel obliged to offer anything to the parents, maybe the parents will get their own back by waiting for the DVD release and make the producers wait a little longer to recoup the millions they spent on a kids flick that can only be enjoyed by the kids.