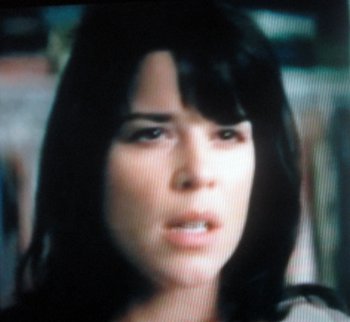 Pardon me forevermore, as I didn’t stand above the fray when it comes to making the point I want to make within this review, which is within a review, which is within a movie remake etc., echoing down the drafty corridors of trippy time (since 1996), when the original Scream marks its blessed birth. I can’t help but remember the trick mirror room at The Texas State Fair, one of the many mysterious sideshows on the Midway, back in the heyday of the Greatest Show On Earth, The TSF.

I digress yet again, but by definition that keeps me on task. I’ve made the mistake of purveying dozens and dozens of Scream 4 ink blotches over on Rotten Tomatoes and now find myself flashing back to that aforementioned trick mirror room, where Drew Barrymore gets a chilly call from Mister Ghostface himself. This is the only scene I could channel properly, since I only have an Associate’s Degree in Slasher movies. 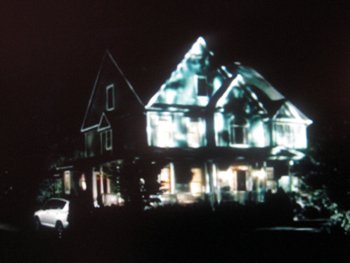 But this cosmic control of Slasher trivia is actually an Achilles Heel in the context of this superbly crafted screenplay by Kevin Williamson, the original writer for Scream I and II. Ironically (again), this puts me in the driver’s seat, being a novice of this specific B Horror Flick genre, where plots are conceived from so many Trivial Pursuit words. My stupidity gifts me with a pseudo-scientific detachment textbook horror masters can only whisper over! (Huh?)

Plucked out from the dusty graveyards, oodles of deteriorating footage of Yesterday’s Has-Been Drive-In Brain-Fry, collectively forgotten by most, except maybe a handful of nerdy PHD horror flick buffs, who can count their numbered days as so many skimpy clips in the webcast camcorder of a Munch-faced mask of an overexposed Ghostface (he’s even a decoration of a mobile banner in the downtown square of Woodsboro). 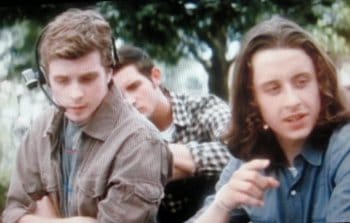 So where are we, or does it even matter? The point is I got good and scared, frightened out of my wits (but left without a care in the world) when I attempted to discern the intricacies of the plot. I’m so ignorant, I even thought the Stab film franchise was for real! As contradistinction to what you are mischievously dreaming up, this is a virtue. Ignorance is bliss; on the other hand, knowledge is the Leviathan that brings man down to his chattering clattering knees. Them bones, them bones, them bones, them bones.

I’m the Fool On the Hill, a babe-in-the-woods without the trappings of so much weighty baggage of trash cinema sinking my ship. I count my blessings in disguise. Having a mere Associates Degree goes a long way. I ESCAPED! YOU DIDN’T! This was the intention of Wes Craven and Kevin Williamson; they’re the pros and we are safe lambs in their spoiler hands. I give it a three and half star rating, a notch and half above your mostly legitimate, average movie critics.

When you ask, am I gonna make my point? You’re missing the point, I already have. Scream 4 rocks, watched it all the way ’til the closing credits and the palpitating popcorn boys ran me out of the cinema house with their portable analog vacuum cleaners and chit chat about a rowdy crowd down in theater 37.

Critics missed the boat too. Classic Slasher genre is resurrected from the dead herein or hereout! Go ahead pile on the cliches; toss ’em on the junkyard charnel house of a body count, that’s already becoming its own skyscraper of narcissistic rotting flesh. Don’t mind if I do (pile on my fair share of vacuous cliches). *(P.S. I was so fooled, I actually tried to find Out of Darkness on Amazon).