Family dysfunction has been done to death in movies, but rare is the film that has not gone out of its way to decontextualize domestic tragedy and bitterness from the historical and cultural forces surrounding it. The ironically titled Revolutionary Road is that unique film giving potent meaning and perspective to what might otherwise be seen as mere household squabbling.

And that key notion here is the unconscious despair ignited by various disillusionments surrounding the warped mystique of the American Dream. Or as the late, great comedian George Carlin said it best, that’s why it’s called the American Dream, because you have to be asleep to believe it.

And there’s another deeply significant aspect to this story touching on the post WWII double-edged sword hopes and aspirations among that suburban-bound young generation back then, and that’s the particular plight of its women. Because while delving into the thwarted lives of suburban women as Revolutionary Road does with such uncompromising conviction, it becomes clear that the impetus for the rage that gave rise to the women’s movement in the 1970s was sparked as much by the excruciatingly oppressive existence and unrealized dreams of those mothers of the subsequent generation of feminists, and that emotionally damaging maternal despair those daughters were nurtured in. And indeed, how the historical moment experienced by that generation of male and female children alike, contributed to the anti-materialistic rebellious sixties. 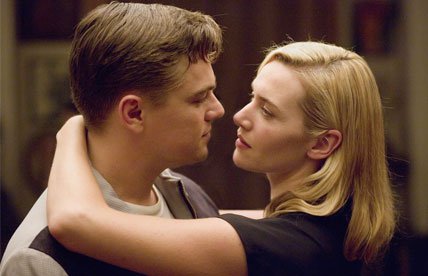 Directed by famed British candid deconstructonist of US culture, Sam Mendes (American Beauty, Jarhead) and based on the scathing Richard Yates novel, Revolutionary Road is more than determined to engage audiences in a confrontation with the consequences of the 1950s cultural period. That is, by taking us through the briefly glimpsed romance and early dull when not combative Wheeler marriage of April (Kate Winslet) and Frank (Leonardo DiCaprio) minus the courtship, wedding and honeymoon details, and without benefit of historical context as scenes play out generically under cover of darkness.

Then, following a brutal argument the night of April’s failed bid as an amateur actress, a harsh morning light is deliberately inflicted on the audience, as a visually both literal and figurative rude awakening to the stinging reality of grim suburban conformist existence. In this manner, Frank heads from his Connecticut home in identical gray flannel attire with hundreds of other dashing commuters, descending upon Grand Central Station to equally oppressive though financially comfortable desk jobs. It’s also evidently noted that there’s hardly a woman spotted among this male herd, as all those domiciled female house pets chain smoke and self-medicate on secret booze back home in their cookie cutter suburban gilded cages.

And though April now bears a responsibility as the young mother of two children, she longs for much more than the hermetic existence and materialistic comforts of consumerism. And she convinces Frank that he needs to part ways as well with his unfulfilling job to pack up everything and head for an adventurous life in Paris as, you might say, premature free spirits. In other words, to be ‘wonderful in the world,’ though without an actual concrete clue.

Eventually, insecurities set in, subconscious excuses arise, hopes are dashed and the marriage threatens to disintegrate under the weight of ferocious battles. And at any moment, we expect a deeply depressed and chain smoking though still domestically dutiful April to morph into Sylvia Plath and be poised to stick her head in the gas oven, a Christlike sacrificial figure destined to be left standing in her own blood, imprisoned behind a window in a hollow world. But like the many housewives around her of that stifled generation, she steels herself to be happy solely for Frank, resigned to living a life of quiet desperation not so much with, but through him.

Revolutionary Road is heartbreaking and unforgiving. And a tough love, eloquent and melancholy tale that resolutely stalks the memory.