This film proves, beyond doubt, that if you have a couple of box office hits, you can churn out any old trash you want. This particular piece of trash is produced by Todd Phillips, director of The Hangover (s), and is arguably the worst film Warner Bros. have ever released.

Thomas (Thomas Mann), Costa (Oliver Cooper) and JB (Jonathan Daniel Brown) are the school losers, so when Tom’s parents go away for the weekend, the three decide to have a birthday party. They believe that if the party is cool, they will become cool to their peers. Unknown to Thomas, Costa puts an invitation on Facebook and every other social network he can find, which results in 2,000 people showing up. The inevitable carnage results and the three boys have to deal with the neighbors, the police and the crazy guy they bought their drugs off earlier that day. 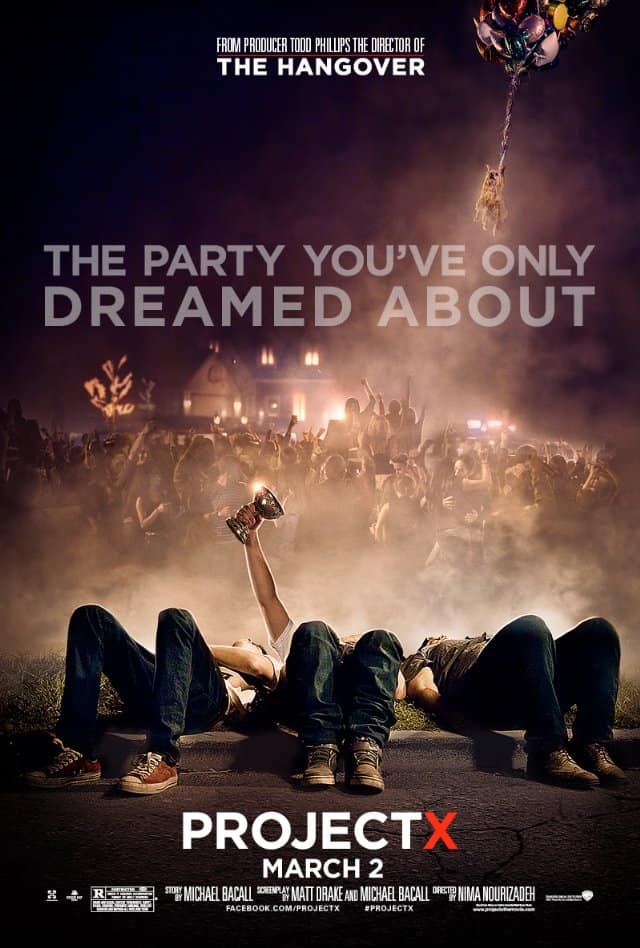 The characters are all stereotypes and one of the three leads is, of course, a Fat Boy. As uninteresting as they all are, what makes this film stand out as singularly unworthy is the fact that it has no story to tell. It drifts, rudderless, for an entire 88 minutes, going from one non-event to the next, feeling more like a series of bad sketches than anything else. There is hope in the beginning that the project Tom’s father mentions could be Project X, and its discovery the catalyst that will hurl the story into action, thus justifying the title of the film. Unfortunately, however, the project is never mentioned again and it seems that it is simply something that the writers threw in to kill time.

This film is shot in the ‘found footage’ style that worked so well for Blair Witch, but not many others. After making their choice, the filmmakers obviously had second thoughts and abandon hand-held for something fancier. The montages are straight out of a Hollywood cutting room and the technically awesome underwater pool shots are incongruous in what is ostensibly a home video. Amazingly, the pool shots don’t get justified with so much as a “Good job the camcorder’s waterproof,” which is not only lazy but also insults the intelligence of the audience, who are suffering enough.

When the MPAA gave their official rating for this film the report said – “Rated R for crude and sexual content throughout, nudity, drugs, pervasive language, reckless behavior and mayhem – all involving teens.” Their disapproval can almost be smelled, and if they had added “and there are no jokes,” the picture would be complete and the audience duly warned to stay the hell away.