Liberia was founded in 1847 by former U.S. slaves shipped back to Africa by the American Colonization Society. Unfortunately, these repatriated blacks considered themselves superior to the indigenous peoples they encountered there, and so they set up a society in which the descendants of African-Americans formed an advantaged elite class.

Tensions ensued between the two groups, and they essentially remained unaddressed until everything came to a head in 1989. At that time, the first of a the civil wars erupted. Those wars combined claimed over 200,000 lives and lasted until 2003.

Pray the Devil Back to Hell recounts the story of how a ceasefire was finally achieved, namely, through the determined efforts of a coalition of Christian and Muslim women fed up with having to beg for food and to raise their children amidst incessant slaughter, raping and looting. Led by Leymah Gbowee, a mom with a toddler, and armed only with T-shirts, signs and a willingness to die for their cause, this intrepid sisterhood stood toe-to-toe with both President Charles Taylor and with the Sierra Leone-based rebels attempting to topple the corrupt ruler’s oppressive regime. 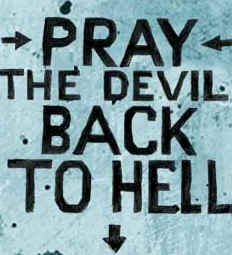 Reams of archival footage allow us to witness, firsthand, the fighting, the peace demonstrations and the negotiations which led to the ouster of Americo-Liberian Taylor. Ultimately, Taylor was replaced by Ellen Johnson-Sirleaf, a native and sub-Saharan Africa’s first elected female head of state.

A salute is in order to director Gini Reticker for this glorious tribute to a bi-partisan band of unarmed women who succeeded where government and UN intervention had failed miserably. For against the odds, they somehow managed to turn chaos into calm by marching en masse and refusing to compromise on their non-negotiable demand that the madness end once and for all.

This is a compelling documentary.

Trailer for Pray the Devil Back to Hell