What do you get when you remove most of that really wicked and wild conversation from a Judd Apatow movie? Well, possibly Pineapple Express. This bland, bargain basement cartoonish misadventure about two bungling Keystone kinda dopers on the run from even dumb and dumber drug dealers, basically lacks the natural high of gabby gross-out classics like Superbad that preceded it.

Several ill-advised choices may be to blame. First, the decision to go with action over talk never quite takes off when you’ve got a bunch of dope-dazed clumsy escape artists doing a lot less fleeing and dodging than just plain stumbling around. Then there’s the far from zany director, though not necessarily his fault. David Gordon Green has a flair for shaping serious little offbeat indie gems like George Washington and Snow Angels, but funny is a whole different level of sensibility. 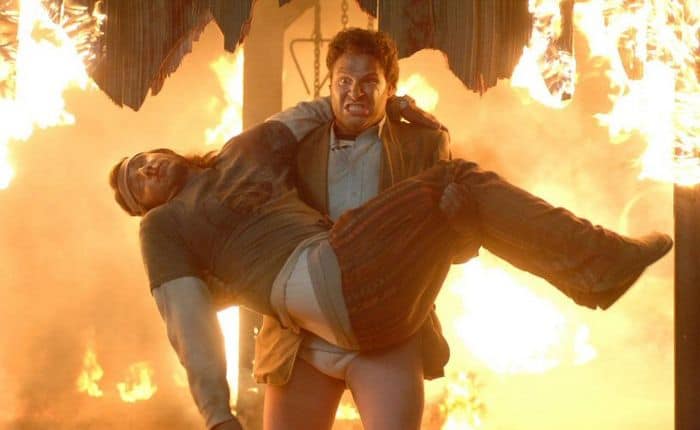 Pineapple Express screenwriters Seth Rogen and Evan Goldberg, who previously pooled their perverse creative DNA for Superbad and Da Ali G Show, just can’t seem to get that same inspired collaborative energy flowing this time around. Rogen is Dale Denton, a jaded process server and master of process server disguises, who’s involved with a high schooler (Amber Heard) in a borderline statutory romance, while in a more obsessive pursuit of the ultimate high.

Denton believes he’s found his proverbial dream bag of weed when goofy local pot peddler Saul (James Franco) offers him a bid on his unique exclusive quality stash of Pineapple Express. And he’s got a futuristic designer reefer to go with it, a kind of multi-pronged contraption in case your face happens to have a few extra set of lips.

But don’t be misled by the inebriating title of this cat and mouse caper, there’s a lot less time available to get high than just laying low, as the chemically disoriented pair elude hitmen and crooked cops alike after witnessing a marijuana murder in progress. Which sets off Rosie Perez into her own particular high here, as a homicidal cop gone wild ballsy babe in blue who can’t seem to get enough of taking it like a man, in the act of giving and receiving pretty painful looking bodily harm.

And while there may be a cautionary message of sorts lurking about, that pot can be dangerous to your health, it’s got more to do with the malevolent smalltime drug lords into doing highly inventive physical injury to their own customers, than any side effects associated with the controlled substance in question. Pineapple Express, a mixed bag of assorted fruits and nuts, with loons on the lam waiting to inhale.