Typically, Marijuana movies revolve around a couple of spaced-out slackers on the run who end up embroiled in a series of madcap misadventures while stoned out of their minds. Whether they’re eluding the authorities, buying more pot, getting double-crossed by pushers, seeking sustenance to satisfy the munchies, or all of the above, the point of these otherwise pointless road pictures is simply to celebrate getting high and rebellion for rebellion’s sake.

Although the legendary Cheech & Chong (Up in Smoke, Still Smokin’, etcetera) seemed to have milked the genre dry back in the Eighties, that hasn’t discouraged other comedy teams such as Redman and Method Man (How High) and John Cho & Kal Penn (Harold & Kumar) from subsequently taking a shot at the dope-driven buddy flick. Now, Pineapple Express features Seth Rogen and James Franco as the latest duo endeavoring to generate a little chemistry while consuming cannabis.

This variation on the shopworn theme opens with a black-and-white flashback to 1937, where we find scientists in an underground laboratory closely monitoring the behavior of a U.S. soldier (Bill Hader) through a one-way mirror as he participates in a top secret study on the effects of smoking weed. The subject so thoroughly enjoys himself that the government decides to dispose of him and to declare the substance illegal. 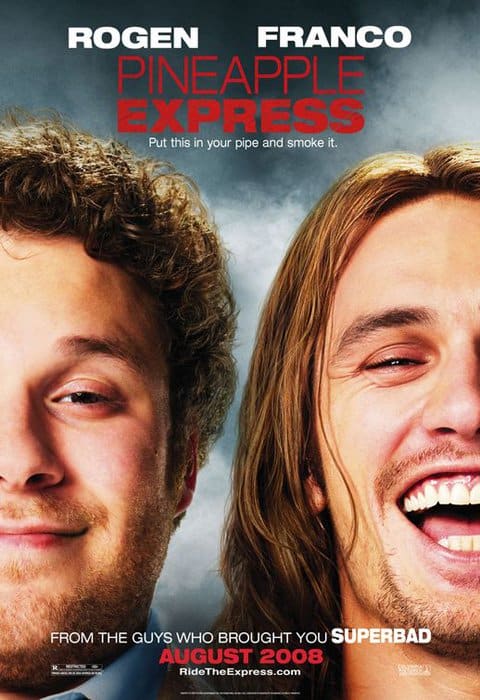 From that irrelevant sidebar, the film fast-forwards to the present to introduce 25 year-old Dale Denton (Rogen), a very inventive process server who dons different costumes in order to serve subpoenas to unsuspecting defendants. After paying a visit to his teenage girlfriend Angie (Amber Heard) at her high school, he stops by his dealer Saul’s (Franco) place to buy a quarter-pound of a potent new strain of pot called Pineapple Express.

High as a kite, he leaves to serve papers on a guy named Ted Jones (Gary Cole), and arrives just in time to witness the ruthless mob boss murder a member of a rival Asian gang with the help of a crooked cop (Rosie Perez). They notice Dale driving off, but the only clue they have to go on is the roach of Pineapple Express he dropped on the street in all the panic.

It’s not long before they trace the weed back to him and Saul, and the chase is on. Ted sicks his goons (Craig Robinson and Kevin Corrigan) on the pair, and what ensues is an ever-escalating display of outrageously violent antics which might best be described as the Three Stooges, only with guns and gore, oh, and lots of smoke, too.

Sidesplitting, high attrition-rate, S&M slapstick where you get to savor the sight of characters getting tortured to death about five times each, if that’s your bag of grass. With memorable performances by Ed Begley, Jr. and Nora Dunn as Angie’s overprotective parents, and Danny R. McBride as Red, a fey, back-stabbing stool pigeon.

To see a trailer of Pineapple Express,