Possibly distinguished solely for the first PG-13 lesbian smooching on screen ever, Vicky Cristina Barcelona is so mediocre in concept despite its star studded roster, that it’s hard to say whether the film suffers more from its sexism or soapsuds. Evidently the concoction of a male (Woody Allen) harboring an extended grudge against women, who seems to find the most therapuetic relief by comically demonizing them on screen, this film without an utter sense of irony, should be a trite, pleasing confection primarily for men.

Vicky (Rebecca Hall) and Cristina (Scarlett Johansson) are yuppie girlfriends taking a summer vacation together in Spain. Vicky, the more straitlaced and uptight of the pair, is engaged to a sensible if not sensuous businessman who will provide the security Vicky is primarily seeking in life. Cristina is the very opposite, a restless and impulsive young woman who has been involved in a series of disappointing romantic relationships, which makes this friendship seem a bit odd in the first place. 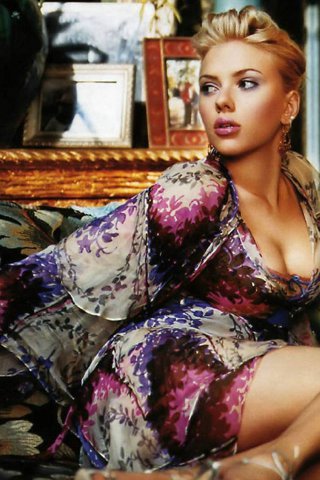 Now, in any other setting – that is, outside of Woody’s insular elite universe far removed from reality checks – these two women wouldn’t hesitate to have this lecherous and possibly dangerous local, removed from the premises sooner than later. But since this is Woody’s world, the more level-headed, initially disgusted Vicky is portrayed as a prude party pooper, while Cristina is the joie de vivre, unpossessive type (translation: slut), who doesn’t mind a brief fling sharing a guy with her best friend. Or with his deranged wife Maria Elena for that matter, who later materializes in the promiscuous personage of Penelope Cruz. And we first hear about Maria Elena when Jose’s dad confesses to him that he misses having her around – after she has apparently disappeared with another man – because Maria Elena’s presence feeds his own obsessive erotic fantasies about her.

That’s not to say that the ensemble cast chemistry, in particular the emotionally explosive conflicts between Bardem and Cruz, doesn’t sustain an impressive and provocative dramatic energy. But their collective intensity is the only element holding this simultaneously dull and irritating narrative together. Which in their absence, would simply seem like yet another limp, amateurish effort by a novice twentysomething filmmaker maxing out mom and dad’s credit cards.

But perhaps most annoying is Woody’s denigrating attitudes towards women, who in this film range from gullible and weak-willed females without backbone who mess up innocent men’s lives, to insatiable whores and/or scary, shrewish maniacs without backbone who mess up victimized male lives on this planet, whether here or abroad. Though the truly gullible element here, is how Woody managed to lure these esteemed actresses into demeaning themselves on screen, but perhaps that’s the real point of this movie. Vicky Cristina Barcelona, a tarted up travelogue giving new meaning to the notion of sex tourism.