Outside the Law is a story about the Algerian fight for independence at the end of World War II. It’s informative and realistic and takes us to the heart of the Algerian people. It’s based on actual events and rustles up a very long charge sheet of the atrocities carried out by the French, who have never looked worse and which, of course, guarantees an audience. Outside of France, of course.

An Algerian family has their land seized in 1925 during French colonial rule, the father and daughters are slaughtered in the 1945 Red All Saints Day massacre and the three remaining brothers are scattered across the globe. Messaoud joins the French army in Indochina, Abdelkader is imprisoned as leader of the Algerian independence movement and Said moves to Paris, where he becomes involved in the shadier side of life.

The film opens with this Algerian family being evicted from their ancestral home. We are drawn in by their tragic plight and, as they trundle away, the matriarch grabs a handful of soil, which symbolizes the destitution wrought upon her family. Everything is equally authentic throughout and the division between terrorist and freedom fighter has never been so absent. 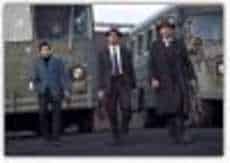 As enjoyable as this film is, it’s clear the French born Algerian writer/director has so much to say that the telling gets a little crowded. It’s interesting to know about the Algerian printer who forges documents, but not essential to the story and if none of the brothers are in the scenes, they probably shouldn’t be there. With so much clutter, sometimes there is no time to build tension and the importance of the impending fight is diminished because we don’t have time to don our armor and savor the taste of battle.

Political films usually rattle someone’s cage, and the Cannes Film Festival received requests from Sarkozy’s government to remove Outside the Law from the festival because, quote “This film denigrates France and the French military.” As the letters did not claim that the facts in the film are untrue, then it’s France who has denigrated France and the French military. I can, of course, understand them being teed off; having this film play in your own back yard is a bit like being punked by Ashton Krusher. Who knew someone was rolling?

Historically, it takes a hundred years for countries to heal their wounds, so France has got another forty years to go before Algeria finally buries the hatchet and stops embarrassing the hell out of surly, off hand Pierres.