Albert Wagner (1924-2006) freely acknowledges that he frittered away his first half-century on Earth chasing skirts to the point that his wanton ways left him on the brink of ruin. A slave to wine and women, he fathered 20 children between his wife and his mistresses.

He would bottom out while spending time behind bars when he was accused of sexually molesting one of his own kids. He admitted committing the act of incest, and considered himself lucky not to have received a stiff sentence of five years instead of just five days. 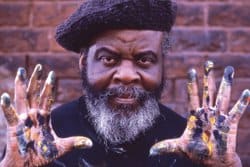 Blaming his profligate behavior not only on lust, but on a combination of racism and narcissism, Albert turned a new leaf after God spoke to him through a piece of wood on his 50th birthday. From that point forward, the shameless sinner reformed, dedicating his life to Jesus and seeking salvation by creating Christian-themed paintings and by preaching as an ordained minister.

Having spawned such a large extended family, Reverend Wagner discovered that he had a ready-made congregation in his own relatives. Meanwhile, he also met with success as a prolific, self-taught folk artist, first in his hometown of Cleveland, and then all across the country, as word of his colorful masterpieces started to spread.

The arc of Albert’s life from heathen to hero is chronicled by One Bad Cat, a compelling documentary narrated by stentorian-throated Delroy Lindo. The biopic was shot mostly on location at the subject’s home/studio shortly before the ailing octogenarian’s death, although director Thomas Miller also mixes in some interesting archival footage.

The charismatic Wagner proves to be as controversial a figure as you’re going to encounter onscreen, as he somehow comes off as simultaneously likable and despicable. Yes, he strikes you as sincerely Born Again, but this belated conversion came only long after his having apparently wreaked enough havoc to leave lots of females’ fragile psyches emotionally-shredded.

Yep, this was definitely one bad mother (shut your mouth!) who could have written a Bible for today’s ghetto gangstas on how to be a player.

To see a trailer of One Bad Cat, visit: http://www.onebadcat.net/Trailer.shtml