If you think Robert Downey Jr. isn’t quite as weird as the characters he plays in Tropic Thunder and Iron Man, think again. Puffing pensively on a cigarette, even after he’s sworn to kick the habit, Downey turned up for this interview carting along an impressive overload of vitamins as if counting on an antidote. Holding forth on the pros and cons of his Iron Man and Tropic Thunder personas, Downey contemplated superhero kid obsessions with him lately, what it’s like getting patted on the behind by divine forces, and recent dumb-ass, self-important actor moments.

Hey, that’s an awful lot of vitamins in your bag there. Okay, I understand you needed them get in shape for Iron Man, but it looks like you have every vitamin ever invented on the planet in there. 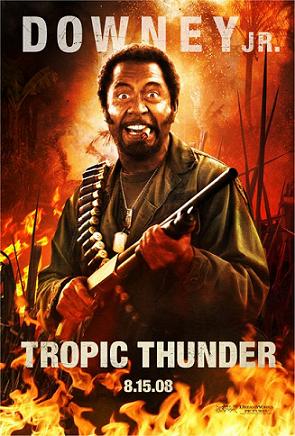 ROBERT DOWNEY JR: Just the ones that are required. Hold on, I have to smoke a cigarette first, before we start talking.

I thought you quit smoking…

RD: (Lights up, and puffs on a cigarette) I did. I was on the wagon for a couple of weeks. But I am really enjoying this Camel non-filter relapse!

Now that Iron Man is a hit, did you always know that was going to happen?

RD: Yeah…I think so! The funny thing is, my memory is telling me that I had all the confidence in the world when it opened. But all I remember is that on opening weekend, we were at, I think Giorgio Albee’s, in Beverly Hills.

And then the box office numbers started coming in. They were like, it could go bigger. And I was like, this movie is going to bring in one hundred million dollars. And they were like, Robert, right now the projection is maybe eighty or eighty-two.

And I was thinking, somebody doesn’t know how to project. And, once the game actually started, I knew that we were going to wind up going really big, and doing these massive numbers. Of course, that’s the way I felt about the Super Bowl. And I lost!

How about Tropic Thunder?

So with Iron Man becoming a monster hit, does your career right now feel kinda like the second coming?

Um, okay…Don’t some of your son’s friends think it’s cool that his dad is Iron Man?

The greatest thing was I was on a rooftop, and a friend in the industry told me, my kid is literally playing with your doll right now. So, I said okay. And I went over and said, hi. And he just froze, looking at me. I was like oh, now I feel uncomfortable.

I thought I was doing like a Christopher Reeves. I was just being cool by going up to the kid. But instead I just realized, I don’t know how this works. He just wanted me to disappear when he saw me.

So now that you’ve tried out Christopher Reeve, what was it like turning into a black man for Tropic Thunder?

RD: With the Lincoln Osiris voice, I made a commitment to myself that I wouldn’t do it during any of the press. I had a reason, but I forget what it was. But it was legitimate at the time. Anyway, when I was doing the movie, the voice came to me, and the whole character rode on that frequency for the rest of the shoot.

I was so happy. It was such a thing of faith, and trust too. I’ve been saying this today to remind myself – I had no idea what I was doing. I just knew that I was going to be in special effects makeup. So I was either going to be really sorry I did this movie, or relatively happy that I participated in this.

I’ve just come to be afraid that it won’t happen when I need it to, and I’m just very grateful when it happens in time. That makes me probably more afraid that because it happened for Lazarus, that somehow or another I still buy into that punishing God

You know, where God is going to slap me in the face one day, and pat my ass the next. Then of course it won’t happen next time I need it to. So, whatever.

I loved being a black man. I was like, this man is so beautiful. He’s deep. He talks from his spirit, and he knows he is surrounded by morons. But he’s going to usher and show them the way.

So why didn’t you want to test his look and voice on regular, everyday people off the set?

RD: I thought that the whole idea was wildly controversial, and that maybe I shouldn’t take my act on the road. But when I put on the makeup, it was one of those transformative, dumb-ass, self-important actor moments.

Do you have much to do to prepare for Iron Man 2?

RD: The great thing is, that it would even matter to anybody. And that they would notice, shows you that I’m not that far off from the character anyway. But it’s like, who is that guy? Get him out of here.

Do you think you’ll ever retire from acting?

RD: I don’t want to be that person. Yeah, I do. Sure I do. You can only be the guy in front of the camera who is viable as a leading man in his forties or early fifties, for so long.

What I’m saying, is that I’ve got to get out of the game, and switch my shit up, before people are going, wow. He’s like the guy not leaving the party.