An exotic blood-drenched slice-em-up saga featuring Korean martial arts mayhem as a ploy to infiltrate big bucks bank accounts, Ninja Assassin could have maybe avoided all the fuss by simply going the less frenzied route of identity theft. But hey, we’re talking a main course here of creative carnage and endless enemy amputations of limbs and heads, without the least benefit of anesthesia.

Director James McTiegue (V For Vendetta) masterminds the indiscriminate homicidal intrigue here as the Ozunu Clan, presided over by the treacherous Lord Ozunu (Sho Kosugi), swipes youngsters for hideout training as cold blooded killers in the service of the criminally minded gang. But when obedient orphan apprentice Raizo (Korean pop singer Rain) witnesses the gleeful slaughter of his child soldier girlfriend Kiriko (Kylie Goldstein) after she attempts to run away, he flees the clannish compound as well, vowing revenge.

Relocating to Berlin, Raizo makes the most of his undercover talent for sniffing out his adversaries, as if pursuing the scent of wolves. But the malevolent clan is hunting him down as well, which keeps Raizo on high anxiety alert at all times, especially after barely escaping a homicidal hottie in the laundromat while gallantly assisting in folding her freshly laundered sheets. Eventually, Raizo joins with initially suspicious Europol Agent Mika Coretti (Naomie Harris) to intercept the advancing Ozuno Clan, who appear to be conspiring in an elaborate scheme to stage a hostile takeover of international banking. Though Raizo has his own trust issues regarding Mika, but he resolves his doubts after determining that the only thing she tends make up shameless lies about, is her jean size. 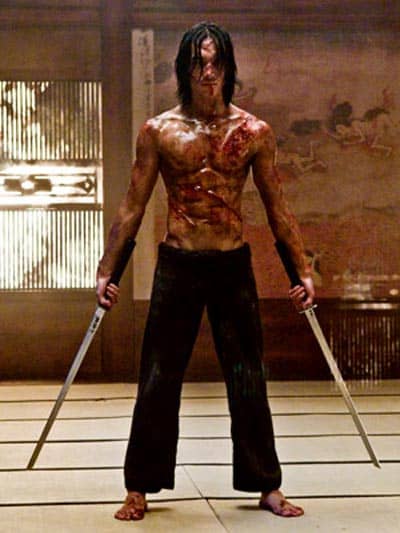 Mass murder has never seemed quite so tedious and lacking in anticipation, since it’s a given that Raizo’s superhero warrior will eventually win every battle, no matter how outnumbered. However, the dumb and dumber German military troops, overconfident that they can easily zap ‘a couple of wacko jobs in pajamas’ are another matter. Though there are several scenes choreographed with breathlessly stylized acrobatic elegance, however deranged, including brazen ninja wilding without a care in the world, in chaotic Berlin midtown traffic.