Prior to 2010, there have been seven films in the Nightmare on Elm Street franchise and that’s excluding the Freddy vs Jason spin-off. There have also been countless books, comics and a TV series. If Warner Bros had been as numeric as Rocky this latest release would have been called Nightmare on Elm Street 8, which sounds like overkill even by Freddy’s standards and, as it also sounds like a spoof, I can see why they didn’t go for it.

The moment this film begins we are thrust slap bang into Krueger territory with the bladed hand, the sleep deprived victim who gets polished off and the blood curdling screams of the terrified onlookers. And all this happens before we’ve had chance to grab our first handful of popcorn. With such a high-octane start, it was difficult to imagine where things could go from there. Simply put, they didn’t. We meet each victim, Freddy suddenly appears, does his thing, and disappears. The last sentence, by the way, is the synopsis. 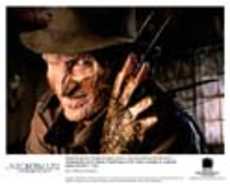 It’s been a long time since Freddy Krueger first graced our screens and one would assume, with his dodgy work ethic, that someone might have gone for a little pay back and given him a few fresh scars. Or perhaps he might have gained some extra powers? Or extra weight? Become charming maybe? We really did need to see something different even if it was just to reassure us that this sequel wasn’t thrown together just so the producers could wring a few more bucks out of the Elm Street franchise. And if the studio really couldn’t come up with some kind of twist, why didn’t they just give him a girlfriend? A lot of women find crazy guys attractive and Freddy is nice and tall and as Rocky did all right with women even with his face bashed in then why not Freddy?

However, despite leaving everything circa 1984, the producers did make one major change and that was to replace the actor who plays Freddy. As we never see an inch of his flesh, his face is set in stone and the little dialogue he has is digitally enhanced, how bizarre is that? The only reason I can think of is that because everything is so same-old, same-old, the publicity department couldn’t come up with anything to put in the press release so the producers decided to recast Freddy. That might sound a little far-fetched, but so does Nightmare on Elm Street 9, and I bet that one’s already on its way.