A downtown Manhattan road movie tailgating after burb teen angst, Nick And Nora’s Infinite Playlist tracks the bridge and tunnel weekend crowd’s slumming adventures of young Jersey party animals rambling around the Big Apple, while itching for a bite of the mystique-laden night life. At least two reviewers so far have griped that the breezy youthful charm of this teen club scene outing made them feel really old, which might not be a good sign. A movie, even if set in a parallel universe like puberty, should let us in on what the fuss is all about, a little more than just as mere nosy audience eavesdroppers.

Directed by Peter Sollett (Raising Victor Vargas) and based on the novel by scribe duo Rachel Cohn and David Levithan, Nick And Nora finds Juno’s Michael Sera once again strumming his way into romance. He’s Nick, a high school student and lone straight guy jamming with the queercore band, The Jerk Offs. Nick is also nursing a badly broken heart, after being dumped by diminutive sexy shrew, Tris (Alexis Dziena). 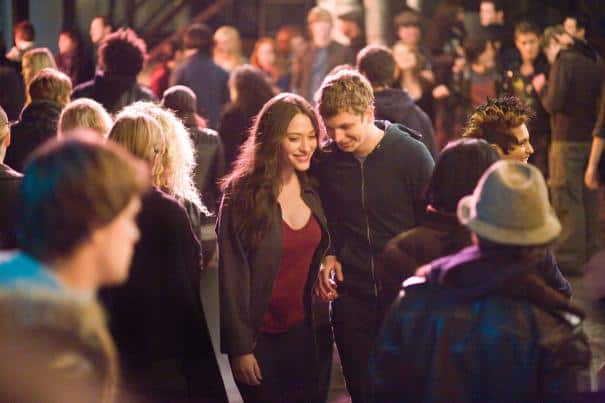 Tris has likewise been dumping the growing collection of sulking CD mixes Nick has been sending her way, in a thankless bid to heat up the mutual infatuation again, musical samplings which fall into the hands of way more appreciative classmate, Nora (Kat Dennings). Nora is billed here as a homely, insecure loser with a mad crush on Nick. But whether it’s a case of misguided miscasting or just plain dumb ideas, sorry, Kat is too super-hot to dismissively demean.

In any case, the two brooding teens end up moping around town together in Nick’s bummer of a boutique yellow Yugo jalopy that keeps getting mistaken for a taxi, on a full length feature infinite quest for their favorite elusive band, Where’s Fluffy. While intermittent detours into comic relief courtesy of Nora’s best buddy, underage drunk Caroline (Ari Graynor) – who retrieves her gum from a public toilet and keeps on chewing – could have been mercifully left on the cutting room floor.

But all is forgiven in a wild money shot defining moment, when passion blooms in stereo off camera, as a studio hideaway’s sound board flashing voice level meters dance around, in synch with sex. Nick And Nora’s Infinite Playlist, a match ultimately made in digital heaven.