Not quite having had his fill of offices just yet – and rumored to be possibly holding yet another office as the next Oscar host – Ricky Gervais turns up in David Koepp’s Ghost Town as a cranky dentist who crosses over briefly into the afterlife, while getting poked in the rear during a colonoscopy. And is doomed for the duration into, well, seeing dead people. Gervais had plenty of other pet peeves to air regarding the real world too, during this conversation about the movie, including teeth, nosy American journalists, private parts in a jar, meaningless kissing, and being a little on the shy if not self-loathing side, when it comes to screen nudity.

RICKY GERVAIS: One of the other journalists came up and said to me, loved the gag in the movie that you’re a dentist and that you wear those crooked teeth! And I turned to her and said, look, I’m wearing them now! These are my own teeth! 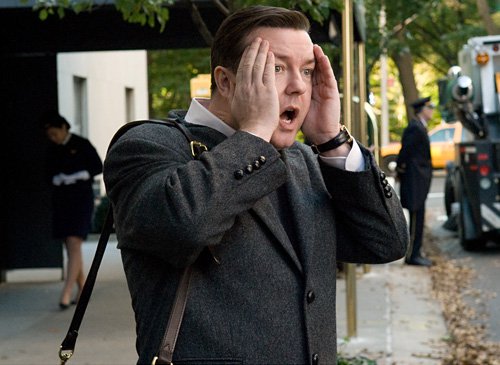 And she goes, really? And I went, of course they are. Do you think I popped them in just for the press? And I wasn’t wearing a fat suit either, before you ask! So, she represents America. The annoying part of it, anyway. The journalists.

Forget about the teeth, any truth to the rumor that you’re not into doing wigs, accents or kissing in your movies?

RG: Nudity certainly is a rule. And you do not want to see this! [Ricky points to his anatomy] What were the other rules?

How about the kiss thing.

RG: The kiss thing is not a rule. Everyone does that, and it’s meant to mean that they live happily ever after. But I love how they sit down instead and they go, ‘just shut up and deal!’ You know, I thought that was so much classier, than just this thing that doesn’t mean anything.

You know, that doesn’t prove they lived happily ever after. It’s just nothing. I think what’s more important in a romance, is that they are soul mates. Not that they’re going to get married, but they are soul mates and they should be together emotionally. I think that’s so much more meaningful.

What grabbed you about this goofy guy you play in Ghost Town?

RG: I love the people who are awkward. The reason you laugh at Pincus from the beginning, is that you feel a bit sorry for him. He’s a very rich, successful, curmudgeonly, misanthropic, ruined man. You know he’s got no chance. He doesn’t know where he is. And when he has to woo a woman he is a buffoon. You won’t write that though will you?

Nah…People think any time you open your mouth, you’re going to be hilarious. Is that tough to live up to?

You make everybody laugh, but what made you laugh the most in this film?

RG: I think one of my favorite scenes is when Tea shows me the dead Pharaoh’s penis in the jar. I never thought gagging would be so funny in a Hollywood movie. That’s never been done. Brad Pitt doesn’t do that, does he?

Probably not. Do you think Tea sexed up the movie satisfactorily?

RG: The fun thing about it, and why she played the character so brilliantly, is that she’s a woman in charge that’s been hurt. Then this unlikely little guy comes along and she says, you’re a strange little man. A random act of kindness! And all Pincus had, was that he made her laugh, that’s all he had.

Those moments where you suddenly see someone needing something, or doing something for the good of someone else, it’s just heartwarming. And obviously the comedy comes from me being a total buffoon, being tongue tied and saying all the wrong things.

RG: Like at one point, I call her an idiot. I’m really wounded. The ‘how not to woo a woman,’ you know?

Speaking of how not to, what’s up with that scene where your character dies for seven minutes while he’s having a colonoscopy?

RG: Yeah, that’s funny, isn’t it. That’s weird. But I didn’t write that! Just to explain, we did a pod cast, and the rules of death were that when you die and you go to heaven, you’re in the exact clothes and position you were at the point of death.

And I said, but what if you’re having a rectal examination and as the doctor was up there, you both died? And the answer was, just go around heaven with your doctor behind you!

Okay…So what direction do you see yourself going in after this? I mean, not after the thing with your doctor in heaven, but after this movie, and rumors that you may be hosting the upcoming Oscars.

RG: I think I want to be one day in a bath chair, boring people about how much fun The Office was. That’d be good. I’ll go, “Nurse!…” But I love doing this. I’ve sort of kept out of that rat race, really. So I like just doing my own thing, and creating my own.

And I would like to do this kind of movie again, maybe. But I’m not going to make a career of it, certainly not. I haven’t got time, but I might want to do another one in a few years. And I’m just in the middle of finishing the film I directed called This Side of the Truth, which is me and Jennifer Garner, Rob Lowe, Jonah Hill, Christopher Guest and Tina Fey.

Wasn’t this a natural progression for you though, doing your own shows and making movies?

RG: No, it wasn’t a natural progression. I’ve never wanted to be an actor, I never thought of myself as an actor. Let’s face it, I’m not a great actor. And the thing I say to directors, is I’m not a real actor. It’s their fault if they’ve spent the money. They can’t have it back!

But I have fun doing it, more than ever. And after this experience, I really love acting, I really, really do. I also know what I’m going keep on doing, I’m still going to write, direct, and be in my own stuff. It’s just such a great job.