Despite planning the perfect wedding, Susan Murphy’s (Reese Witherspoon) big day ends-up derailed by a series of disasters. First, her self-absorbed fiance, Derek (Paul Rudd), asks at the last minute if she would mind honeymooning in Fresno instead of Paris, so that he could schedule an audition for a TV news anchor position there.

But that annoying inconvenience pales in comparison to what transpires when she’s struck by a mammoth meteorite falling out of the sky shortly before entering the church. For, by the time Susan has walked down the aisle, the guest can’t help but notice that the bride isn’t blushing anymore but glowing iridescent green and gradually morphing into a 50-foot tall platinum blonde blessed with superhuman strength.

This development soon comes across the radar of General W.R. Monger (Kiefer Sutherland), the head of a top secret federal agency assigned to hide any proof of paranormal phenomena from the public. So, he dispatches soldiers armed with tranquilizer darts to subdue Susan and to cart her off to a maximum-security government facility where four other genetic anomalies are already housed. 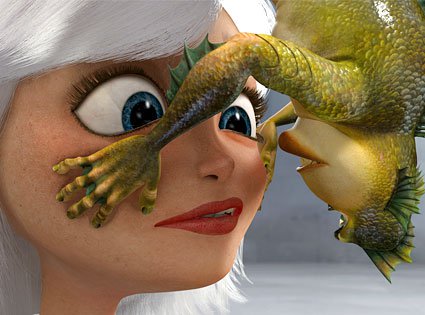 There, Susan, aka Ginormica, bonds with her fellow freaks of nature: B.O.B. (Seth Rogen), a brainless, but indestructible, gelatinous blob; Dr. Cockroach (Hugh Laurie), a brilliant mad scientist; Insectosaurus (Conrad Vernon), a 350 foot-long, silk-spitting worm; and the Missing Link (Will Arnett), an amphibious hybrid which looks like the first creature to crawl out of the sea on the evolution chart. And just when they’re on the verge of giving up any hope of ever seeing the light of day again, a flying saucer lands in California with an army of menacing clones aboard.

After their diabolical leader Gallaxhar (Rainn Wilson) paradoxically announces “I come in peace… I mean you no harm and you will all die,” hawkish President Hathaway (Stephen Colbert) is impatient to exercise the nuclear option in response. However, General Monger talks the commander-in-chief into unleashing his rag-tag team of superheroes on the horde of invaders from outer space.

The spectacular (especially in 3-D) epic battle which ensues up and down the streets of San Francisco, on the Golden Gate Bridge and below in the Bay is the raison d’etre of Monsters vs. Aliens, a CGI-driven animated adventure that’s all about the wow factor. Don’t be put off by the spoon-fed storyline simplistic enough for a five year-old to follow, this is a flick to be appreciated for its technical wizardry alone.

A wholesome family flick that everybody can enjoy, provided mom and dad are willing to turn off their brains when they put on the 3-D glasses.