This is yet another Woody Allen film with a lead character who is a writer struggling to write. It’s a lot better than anything he’s produced for years, but there’s none of the old genius in sight and no sign of the enigmatic characters he now seems unable to create.

Gil (Owen Wilson) is a successful Hollywood screenwriter who is attempting to write his first novel. He is engaged to Inez (Rachel MacAdams) and the pair accompany her parents on a business trip to France. Gil falls in love with Paris and, to Inez’ horror, informs her he wants to end his materialistic lifestyle and immerse himself in the culture that gave breath to the masters in the creative movement of the 1920s.

While Inez goes clubbing with her friends, Gil wanders the cobbled streets of Montmarche and stumbles upon a group of artists. He has drinks with Hemmingway, dinner with F Scott Fitzgerald and Degas takes him to Picasso’s studio where he gives Gertrude Stein his unfinished book to read. His fairy tale has begun. 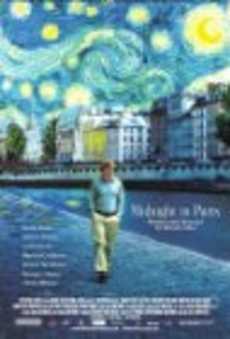 The other characters in this film are people we’ve met many times before. Inez is superficial and materialistic and not much else, and we therefore like Gil even less for having such a shallow partner. Inez’ parents have identical values to their daughter as do the L A friends Inez bumps into (which happens to everyone who visits Paris, I’m sure). A lot of time is spent with these uninteresting people but only lip service is given to the masters who arrive in their droves; there is nothing inherently fascinating about actors popping in for a cameo appearance, no matter how revered their namesake may be.

After hurling us back to the 1920s, we then take another leap to the 1800s, at which time it becomes clear the intended message of the film is that the grass is always greener, particularly if it’s growing in a different century. Perhaps this is the reason Mr Allen himself left the US and continued his writing career on the other side of the Atlantic, or perhaps it’s because the European are the only people left who will finance his films.

The Brits were the first to open their cheque book to Woody Allen, but now it appears his films can’t even get released there.