Jacques Mesrine was a French international gangster who was gunned down in 1979 by a police unit set-up solely to eliminate him, thus guaranteeing he would become one of history’s criminal icons and ensuring his robberies, murders and prison breaks would one day become legendary. And as French exports go, this renegade is definitely up there with the Camembert, Pinot Noir and fries.

Note: For those unfamiliar with the US, the Americans dropped ‘French’ from ‘fries’ after the French government publicly dissed the Americans over the Iraq invasion/WMD issue, with the French saying they wanted ‘more proof’. The last time they made that request it came marching into Paris waving a German flag. 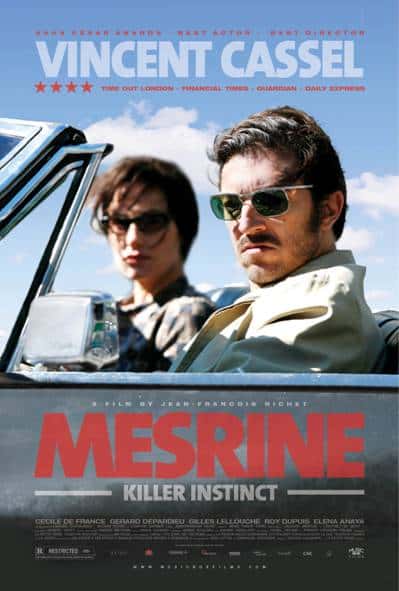 The story starts when Mesrine is in the army during the Algerian War. When his time is served he returns to France to live with his parents but he is unable to settle into civilian life and turns to crime. His natural aggression and cool demeanor serve him well, and when he robs, he does so with panache, but panache doesn’t make him immune to the law and he serves his first sentence for robbery at the age of 26. His crimes become more and more outrageous, spanning continents, and by the time he reaches 36 he has been declared Public Enemy No. 1 in both Canada and France.

Mesrine’s fearless bravado and mighty swagger are depicted well, and the filmmakers take a lesson from him and show bravery of their own by revealing to us his dark side, the side that crosses moral boundaries and leaves us no option but to recoil in distaste. As much as we no longer like this man, we are still forced to route for him when he makes a giddying attempt to free his former prison mates from their tortured existence in an infamous penitentiary. Being manipulated so cleverly is the reason why we all go to the movies and the filmmakers are to be applauded for keeping it real.

However, and although the characters all resonate, there is emotional information that we need but don’t get. When Mesrine returns from the army, there is no moment of decision that instigates his nefarious new life and when his attitude to his wife suddenly changes we are left, like her, wondering what happened to make him act so differently to the family that he once adored.

Fame and tragedy, as the National Enquirer and Star prove every day, are a combination no audience can resist, so Mesrine was always going to end up on the silver screen, and this film not only gives us a thrilling experience but also leaves us with a piece of French history that we can all enjoy. Anyone for a slice of Berlin toast?

Based on the book L’instinct de Mort by Jacques Mesrine