Nothing Is Sacred in Silly Spoof of 300

Released just last year, 300 was a green-screen epic recreating the bloody Battle of Thermopylae during which King Leonidas led several hundred Spartans in a futile defense of the country against invaders from Persia. Meet the Spartans is a light-hearted spoof of that costume drama which pits a now gay army against a suddenly hip-hop horde of marauders.

Since the movie is being brought to you by the same purveyors of parodies who made Scary Movie, Date Movie and Epic Movie, you ought to have a good idea of what to expect. For example, instead of macho heroes marching valiantly off to war, anticipate the sight of more sensitive soldiers affectionately holding hands two-by-two as they skip up the trail to their fate. 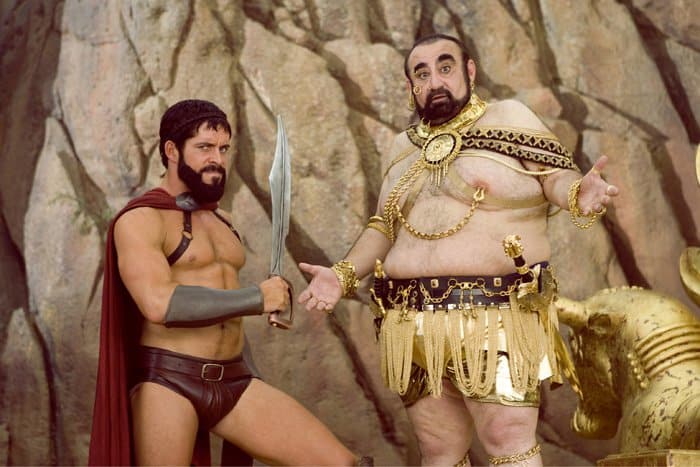 Although the picture fairly faithfully follows the plot of 300, it obviously does take considerable license with the facts. Besides revisionist history, the production also mixes-in prominent placement ads for everything from Gatorade to Grey Goose Vodka to Dentyne to I-Pod to Coke to Budweiser, all while taking potshots at a variety of movies, TV shows and cultural icons.

Seems that everyone is fair game, here, especially females whose faces and genitalia we generally find splashed across the tabloids, including Britney Spears, Paris Hilton and Lindsay Lohan, each of whom is graphically impersonated sans panties, the PG-13 rating notwithstanding. Other celebrity look-a-likes include Ugly Betty, American Idol judges Paua Abdul, Randy Jackson and Simon Cowell, the show’s host Ryan Seacrest and sexually-ambiguous also-ran Sanjaya. Warning: while some of the aforementioned impersonators bear an uncanny resemblance to the real people, others must have been the directors’ idea of a joke. 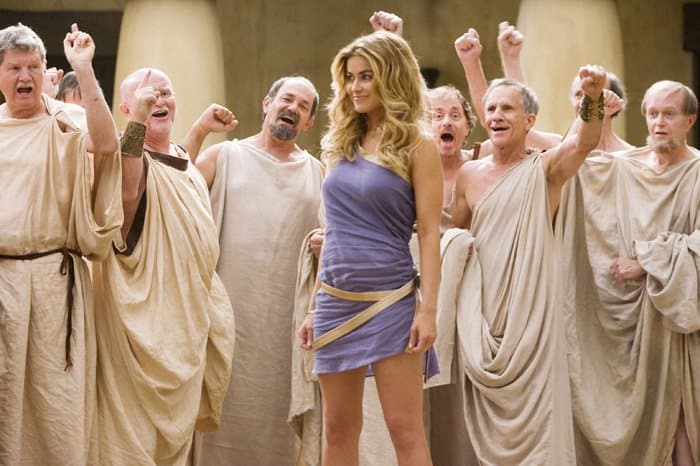 This mean-spirited shock comedy is likely to make you laugh to the extent that you enjoy poking further fun at the vulnerable and the emotionally damaged. For example, there’s a parody of Tyra Banks’ on-air meltdown over her big butt bathing suit picture. Most characters end up in the Pit of Death as soon as the writers run out of ideas of what to do with them.

Yet, Britney definitely gets the most mud tossed in her direction, whether over shaving her head, going public with her privates, or being caught up in a custody battle with K-Fed. One of the film’s funnier moments arrives when internet curiosity Chris Crocker appears on screen delivering the “Leave Britney Alone!” rant on YouTube that landed him his 15 minutes of fame.

The movie makes other allusions to Austin Powers, Oprah, Stomp the Yard, You Got Served, Deal or No Deal, Yo! MTV Raps, Borat, Happy Feet, Ghost Rider, Transformers, Spider-Man Grand Theft Auto, Rocky and more. Unfortunately, most of the skits fall flat, since they have nothing of insight to share about the subject.

Don’t expect anything of depth and you won’t be disappointed by this predigested pabulum. Mental bubblegum for the brain whose cinematic taste lasts only about as long as the viewing.