This is a film about a group of male strippers, which is a sleazy topic indeed, but the filmmakers avoid crass humor and tell their story with a panache that few lightweight movies muster. The characters are, of course, gregariously seedy, but a real world is created and, cheesy bits aside, it’s great entertainment from beginning to almost the end.

Magic Mike (Channing Tatum) does manual work by day and moonlights in a club owned by Dallas (Matthew McConaughey), by night. Adam (Alex Pettyfer), has just dropped out of college, lives with his sister, Brooke (Cody Horn) and ends up working on the same building site as Mike. Mike takes the young kid under his wing and gets him a job at Dallas’ strip club. Unfortunately, Adam falls for the pseudo-glamour and gets involved with the wrong kind of women and the dangerous world of drugs. 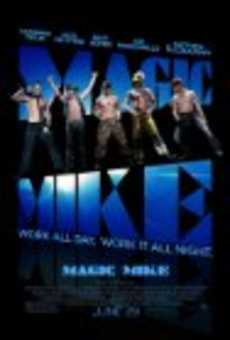 McConaughey is on stage in the opening act and proves, within seconds, that this is the role he was born for. He drawls, rocks, titillates and tempts, and it’s no surprise to learn that, during filming, he was dragged off the stage by his frenzied female audience. Such a stellar performance makes him a hard act to follow, but when Magic Mike and his dance team hit the floor, they keep the energy high, and the show goes on. Tatum, in particular, shimmies up some amazing moves and leaves no one in any doubt that he did actually once do this for a living.

What lacks sparkle in this story is the friendship between Mike and Adam. There is no good reason for Mike to take Adam under his wing, and their lack of chemistry make them an extremely dull pair. Tatum does hold his own in every scene, but when Petttyfer is in the presence of McConaughey, he disappears behind the dazzle. Also, when Mike pursues a superficial romance with Joanna (Olivia Munn), it diminishes his relationship with Adam’s sister, and prevents the audience from believing that she is the girl he really wants to be with.

Considering the star power in this movie, it has a surprisingly low budget of $5 million, and will undoubtedly be a huge financial success.

Guys will want to see it because it’s an all-guy film, and gay guys will want to see it for obvious reasons. So what about the women? Do they want to watch this kind of smut? You bet they do, especially the ones who’ve never seen a guy get dollars stuffed down his underpants before, because they’re too embarrassed to wait in line outside a male strip joint.