A movie about Lyme disease and its impact on a Long Island burb already plagued by a seeming edpidemic of decadent behavior, Lymelife is not just about predatory impulses of the insect variety. In fact the humans who prowl about in this warped take on bedroom community decadence LI style in this less lymelife than lowlife split level noir, make the disease ridden bugs seem somewhat benign in comparison.

Written and directed by Derek Martini, executive produced by Martin Scorsese and co-produced by Alec Baldwin who also stars in the film, Lymelife is a multi-narrative, cross-generational hormonal romp with an emphasis on sex on the sly machinations. Rory Culkin, the youngest of that precocious Culkin brood, is Scott Bartlett, a shy, withdrawn fifteen year old who’s constantly bullied at school, while nursing a secret crush on flirty next door neighbor, Adrianna (Emma Roberts).

But those are not the only sparks flying between adjoining picket fences. While Adrianna’s sickly dad Charlie (Timothy Hutton) is hiding away from the world in their cellar after contracting Lyme disease, his frustrated spouse Melissa (Cynthia Nixon) is getting it on upstairs with Scott’s frisky father Mickey (Alec Baldwin), who is also Melissa’s employer. And Charlie passively eavesdrops on the entire proceedings. Then at one point, two entirely separate set of sex partners nearly catch each other in the act simultaneously. Scorecard, please. 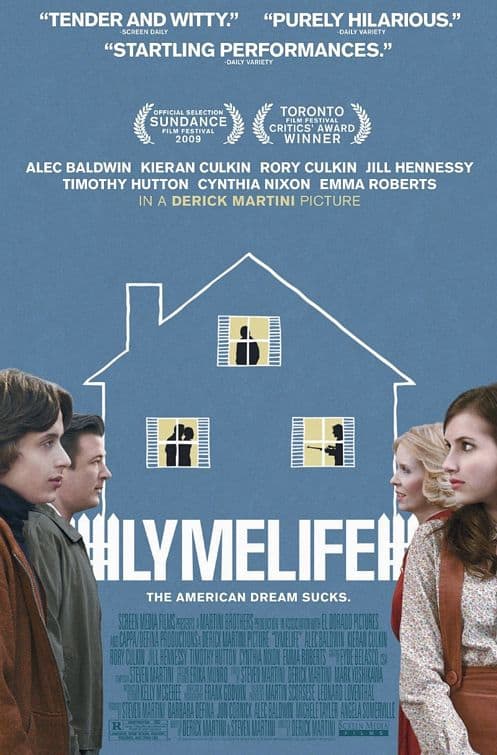 Meanwhile, Scott’s temperamental older sibling Jimmy (Kieran Culkin) returns home on leave from the army and beats up his kid brother’s chief tormentor, while their dad obsessively dabbles in the late 1970s real estate boom back then. At least between hot trysts with his accomodating next door neighbor assistant.

And mostly griping about it all on the sidelines, is Mickey’s long suffering wife Brenda (Jill Hennessy), who has pretty much resigned herself to her husband’s wicked ways. All this seething and hand wringing, mostly negative ensemble chemistry isn’t half bad, though on the morbid side.

There’s also a bit of underage sexual peek-a-boo in a local church confession booth involving a red bra, mystery lost and found Long Island Railroad commuter tickets, and a bit of strange fatherly advice about how something no bigger than a pimple on your butt can change your life. Will anyone who has ever lived on such a suburban street like this, on Long Island or anywhere else, please raise your hand.