American Pie spawned a whole genre of teensploitation flicks which basically revolve around the earnest endeavor of a repressed nerd to lose his virginity. Currently in theaters, we have three such offerings, Bart Got a Room, The Education of Charlie Banks and Adventureland.

Adventureland is getting all of the buzz because it was directed by Greg Mottola, whose directorial debut, Superbad, was in this critic’s opinion the funniest film of 2007. While his highly-anticipated, sophomore effort still relies on the tried and true theme of a loser trying to get laid for the first time, the laughs don’t come nearly as frequently, unless you’re a sucker for a running gag featuring puking. The reason for all the regurgitation is that the story takes place in an amusement park frequented by teens whose favorite pastime is inducing vomiting via a combination of dizzying rides and the consumption of alcohol.

Although the protagonist of this semi-autobiographical film was presumably patterned after Mottola himself, he’s played by Jesse Eisenberg as if asked to channel the spirit of Michael Cera, the reigning king of the geek archetype, and star of Juno, Superbad and Nick and Norah’s Infinite Playlist. To his credit Eisenberg has Cera down pat, mimicking his mannerisms, tics and hesitating speech pattern to perfection.

Set in 1987, the story unfolds in the city of Pittsburgh where we find grad school-bound James Brennan (Eisenberg) being informed by his folks (Wendy Malick and Jack Gilpin) that he’ll have to help pay for his tuition at Columbia. So, the 22 year-old virgin takes the only job he can find, a minimum-wage position running a carnival game at Adventureland.

There, James is soon surrounded by the usual suspects you expect to find in stock teen-oriented fare, from Joel (Martin Starr), a sidekick nerdier than Superbad’s McLovin’, to the town slut (Margarita Levieva) to a bully (Matt Bush) who seizes any excuse to sucker punch him in the groin (another running joke, ha-ha). The plot thickens when our terminally-unassuming hero falls in love at first sight with a cute co-worker (Kristen Stewart) who becomes the object of his injection. Trouble is she’s already involved with a misogynistic, two-timing philanderer (Ryan Reynolds) who’s no good for her.

While we’re waiting for her to wise up, the picture serves up just enough slapstick and bodily function humor to make it all worthwhile. In fact, a better way to approach Adventureland might be as a character-driven soap opera resting on a credible script and arriving at a satisfying resolution.

A refreshing retro comedy with depth recommended more for the message and the romance than for the shock value of its raunchy moments.

Rated R for profanity, sexuality and drug use.

To see a trailer for Adventureland, 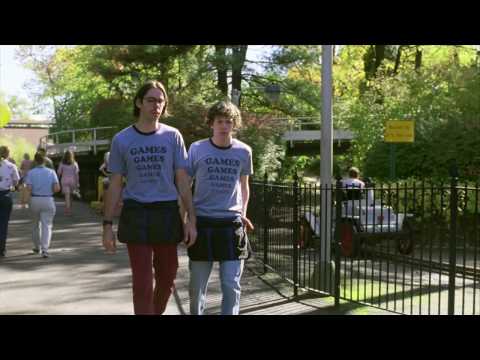