Little Sister is a movie about a nun, a pot smoking mom, a recluse and his over-sexed girlfriend, which are all great fodder for a wacky comedy but, unfortunately, the filmmakers opted for a serious drama instead. The result is something of a hybrid, with characters we’ve met before and a lightweight story that has nothing to say. 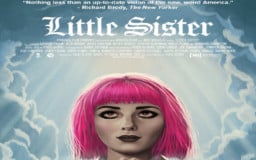 Colleen (Addison Timlin) has been a novice nun for three years and is soon to take her vows. She’s contacted by her mother (Ally Sheedy), who tells her that Colleen’s brother (Keith Poulson) has returned home. Colleen gets permission to visit her family and makes the trip in Mother Superior’s car. She is welcomed by her parents, but her brother, whose face has been badly disfigured in Iraq, initially refuses to communicate. Colleen tries to navigate a safe passage around her family and the people she used to know.

When we first meet Colleen, we are given the impression that she is having doubts about her calling, and there’s every reason to expect a crisis that will draw us into the dilemma of a woman about to sacrifice her life for her faith. Something so profound is unfathomable to the Average Joe (i.e. the audience) and would be compelling to watch. However, this topic is barely referred to again and the only reminder of Colleen’s calling is when she says Grace.

There are a lot of story threads left dangling and which, therefore, are nothing more than time-fillers. For example, Colleen’s brother makes out with her friend, while his girlfriend is at home on a dating site, dressed in naughty underwear. At the end of the film, a 20-second montage reveals that the couple have a fairy tale happy ending. When and how were the issues of these two people resolved? And what did they have to do with Colleen and the life she used to/wants to/will lead?

The final question that this film fails to answer is what the consequences are for Colleen disobeying Mother Superior. In their last conversation, she actually puts the phone down on her which, again, gives the audience an expectancy of conflict that never actually arrives. It also makes me think that if those who answer God’s calling aren’t accountable for their actions, then the rest of us can’t be either. Fingers crossed for that one.

December 2016 – Released in USA and Brazil only