The very serious issue of self-mutilation is raised in this film but, unfortunately, never dealt with. Instead, the filmmakers hop from a character driven piece to action, which is a fatal move, and storytelling at its weakest. In fact, it’s not really storytelling at all.

Lily (Juno Temple) is 15-years-old and lives in a trailer park with her mother (Leslie Mann). Her best friend is Alison (Kay Panabaker), who lives nearby with her father. While Lily is a dare-devil, Alison is more sensible, and Lily constantly criticizes her friend for not wanting to have fun. They spend a lot of time hanging around the run-down area where they live, which is where they meet a gang of boys from L.A. One of them, Jesse (Kyle Gallner), flirts with Lily, and gives her his number when they leave. Life at home is always dull and, when things get complicated, Lily persuades Alison to run away with her to meet up with her new amour. 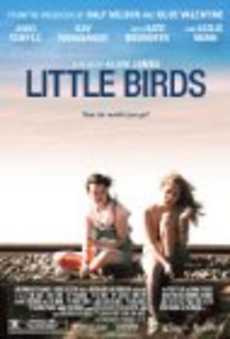 When we meet Lily, she is sulky, supercilious and reluctant to communicate with her mother; in other words, she’s a teenage cliche. However, Lily does have an additional problem, in that she cuts herself, and refuses to acknowledge what she’s doing. Her mother is, of course, man-hunting-trailer -trash, but she does try to help her daughter by taking her to therapy. There is actually a scene with Lily and her therapist, but the writer turns this potentially insightful set-up into a cheap joke, which doesn’t get Lily, or the story, anywhere.

There is really no one in this film to like. Neither of the girls is real enough to connect with, and the adults are all one-dimensional cardboard cut-outs. When the girls team up with the boys in L.A, a plan is hatched to use Lily as bait to lure men back to their motel room, so they can rob them. Obviously, it’s hard to warm to anyone with such callous intentions, including our heroine, who at this point becomes as unlikeable as the boys. Allison, of course, has to voice her disapproval, but she does this by reciting platitudes that are as hollow as the ones she was reciting when the film started.

Right up until the final scene, Lily is enticing men back to the motel, showing clearly that she is in the same mess as when we first met her. So, with no journey undertaken, there’s no journey’s end, and in its place is a fight scene, with Lily being saved by a guardian angel who turns up from nowhere with a loaded Glock. After this, the boys who weren’t K.O.’d in the brawl silently fade away, and Lily and Alison leave the motel to go for a walk on the beach. It doesn’t get any more earth-shattering than that, does it?