This enthralling story is driven by the emotions of people struggling to live with hardship, superstition and an overbearing sense of pride. It’s realistic and illuminating and is made all the more potent by its stark simplicity.

Chanda, 12, lives in an impoverished South African township with her mother, step-father and young siblings. When tragedy strikes the family and her baby sister dies, her mother is bereft and her step-father nowhere to be found, so it is Chanda who goes to the funeral home to arrange her little sister’s burial and it is Chanda who confronts her drunk step-father for stealing the money that was to pay for the baby’s coffin. The family tries to move on, but Chanda’s mother becomes debilitated by an unnamed disease and as she takes to her bed, so Chanda slips into her shoes. The young girl wraps her fragile family in her mighty arms and never falters from her self-appointed task as mother, father, counselor and nurse. 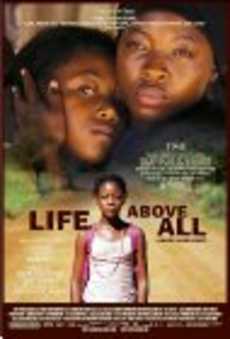 We first meet Chanda at the funeral home and it is these first few minutes that epitomize both her and a theme that rumbles below the surface from beginning to end. It is cruel enough that an infant has died in some dark corner of the world, but we see a different kind of suffering as Chanda defends the parents who have put so great a weight on such tiny shoulders and It is here that we fall in love with the brave little soldier as she stands like a citadel, protecting the ones who have failed to protect her.

Chanda’s sense of justice extends far beyond her family. Her best friend, Esther, is left an orphan when her parents die of AIDS, and Esther’s subsequent behavior leaves her ostracized by the community. Chanda will have none of it and again fights the good fight, fearless of the pack who hover at her door, determined that the poison remain outside the home she has given to her friend. At that moment, no one has ever looked bigger.

This is a human drama but at the same time relates the tragedy of the 800,000 children whose parents have died of AIDS and who are left to fend for themselves in the unforgiving ghettos of South Africa. Children look after children, and many die, but hopefully some possess the same ferocious mien that gave Chanda the chutzpah to turn each dusty day in shanty town into a triumph for love.

Adapted from the Novel ‘Chandra’s Secrets’ by Allan Stratton