When you think of the Middle East, probably the last thing that comes to mind is anybody settling their differences in a civilized manner. But that is exactly what we find in Lemon Tree, a gripping drama based on a real-life incident which revolved around a standoff between a Palestinian widow (Hiam Abbass) and the Israeli Minister of Defense (Doron Tavory).

With her children grown, Salma Zidane had been quietly minding her own B.I. business on a modest estate she inherited from her father, tending to the lemon grove located on the property with the help of an elderly caretaker (Tarik Copty). But because the land lay along the border between Israel and the West Bank, everything changed the day that Mr. Navon and his family moved into the newly-built McMansion right next-door. 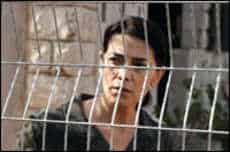 The problem was that the Israel equivalent of the Secret Service was charged with the unenviable task of protecting the Minister from terrorists. And the first thing they noticed in reconnoitering the perimeter was the cluster of 300 trees directly across from the house which posed a security risk since it could easily provide cover for an assassination attack.

When they inform Salma of their plans to flatten the field, she urgently summons her son (Loai Nofi) back from America where he has been working as a busboy in a restaurant in the nation’s Capital. But the pissed-off Palestinian doesn’t ask Nasser to strap on a vest of plastic explosives and blow himself up on a bus filled with Jews, but to return home to help her fight the arbitrary order in court.

She also retained his services of a handsome, young attorney (Ali Suliman) who just happens to be recently divorced. And while the lonely lawyer is trying to focus on getting an injunction and preparing for a tough trial, it’s no surprise that his head might be turn by the well-preserved cougar who hired him. 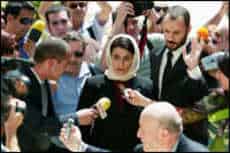 Still, the point of the picture is to highlight the legal case which the secret lovebirds appeal all the way up to the Supreme Court, despite the overwhelming odds in the favor of the Israeli military. However, a pivotal player proves to be the Defense Minister’s wife, Mira (Rona Lipaz-Michael), whose compassion helps lead to an 11th hour compromise that would warm the heart of Solomon.

If only every Arab-Israeli conflict could be resolved with Biblical wisdom rather than with bombs and bullets!

In Hebrew, Arabic, French and English with subtitles.

To see a trailer for Lemon Tree,